The Moment Banita Sandhu's Photoshoot Was Ruined By... "Sea" For Yourself Inside 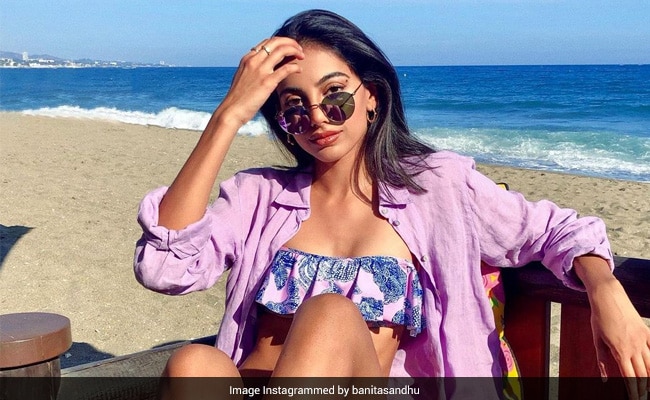 We have all seen our favourite actors being a part of gorgeous photoshoots but not many of us know what actually happens behind-the-scenes on these sets. Well, now actress Banita Sandhu has given us a glimpse of one of her older photoshoots. It is not a well-curated and edited behind-the-scenes video that she shared. Instead, she gave her fans a look at the raw footage of what went wrong. The clip shows her posing by a few wooden logs on a beach. Banita looks stunning in wet hair and orange swimwear, and is all set to ace her snap. However, mid-shoot, she is startled by the waves, which leaves everybody laughing.  Banita added a funny caption to the throwback post and it goes like this, “Didn't sea that coming.” Also, don't miss the message on the photographer's T-shirt which read, “Please wash your hands.”

The actress has been winning the Internet with her fashion looks, lately. One of her recent posts is a pretty mirror selfie. Banita rocked a little black dress like a true diva in the picture. The semi-formal outfit was matched with playful polka-dotted heels. “Hola,” she said in the caption.

Banita also shared snaps from her shopping day. The 23-year-old wore a stunning pink pantsuit that was matched with a black jacket. In the same photo series, Banita can be seen with tinted glasses and a face mask. She asked fans in the caption, “Suits me?”

Also, “Eat your greens,” Banita demanded in one of her recent posts. However, the images tell a different tale. The young star was talking about her fur trench coat, nail art and drink, which were all green in colour.

Banita appears to love her reds just as much as she loves her greens. In one of the earlier uploads, Banita displayed a bowl of delicious strawberries and tried to match it with her nail art. We can also spot a shopping bag and coffee in the frame.

Banita was seen in the movieOctober opposite actor Varun Dhawan. She also played the female protagonist in the Tamil film Adithya Varma, which was a remake of the hit Telugu film Arjun Reddy.