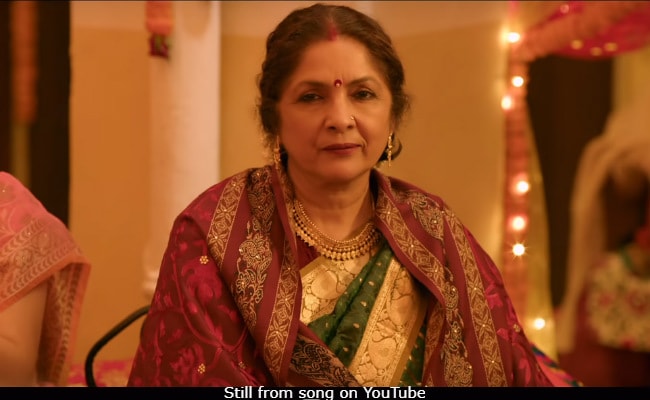 Sajan Bade Senti, the new song from Ayushmann Khurrana and Sanya Malhotra's film Badhaai Ho, released on Wednesday. The song track two adorable love stories unfolding simultaneously - one featuring Ayushmann Khurrana and Sanya Malhotra while the other features Neena Gupta and Gajraj Rao - who play the role of Ayushmann's onscreen parents in the film. For the uninitiated, Badhaai Ho centre around a middle-aged housewife (Neena Gupta) whose unexpected pregnancy forms the epicentre of the film's storyline. In Sajan Bade Senti, Gajraj Rao, who plays an absolute romantic at heart, can be seen admiring his wife and flirting with her in cute little ways away from the prying eyes of guests at a function.

However, the love exchange between the couple does not escape the attention of veteran actress Surekha Sikri, who plays Ayushmann Khurrana's grandmother in the movie. Sajan Bade Senti is composed by Kaushik-Akash-Guddu (Jam8) and is sung by Dev Negi and Harjot Kaur. Sajan Bade Senti also has a glimpse of Ayushmann Khurrana and Sanya Malhotra's romance but it is Neena Gupta and Gajraj Rao who steal the show.

In the trailer, Neena Gupta's character appears to embarrass her family members with the baby news in the trailer, following which they have to deal with "society ka crap". About her role in the film, Neena Gupta told IANS: "I did not even read the script of the film because the subject was so interesting. Female actors of our age don't get a chance to play such interesting characters. This phase of our life is not addressed only in our Hindi cinema. But I think the change is happening because of the youngsters who are writing such scripts," Neena Gupta said.