Morni Banke is the second song from the film Badhaai Ho 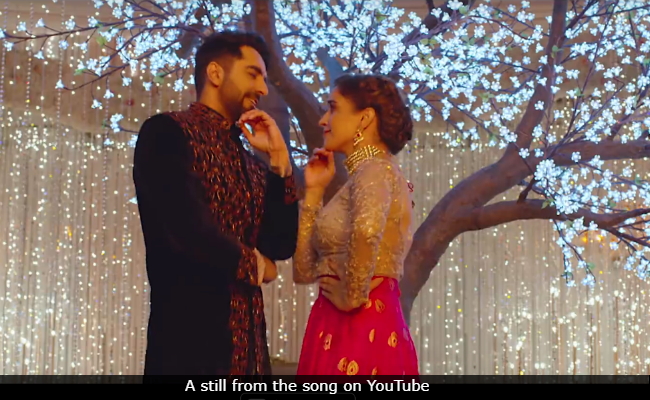 We were not even over Badhaaiyan Tenu yet and the makers of Badhaai Ho released yet another peppy song from the film, titled Morni Banke on Wednesday evening and catchy can't even begin to describe it. The song features the film's lead pair Sanya Malhotra and Ayushmann Khurrana along with Neena Gupta, Sheeba Chaddha and Gajraj Rao, grooving on the dance floor. The video showcases the engagement ceremony of Ayushmann and Sanya. The song has been sung by Guru Randhawa and Neha Kakkar and it has been composed by Tanishk Bagchi. It wouldn't be wrong to term Morni Banke as the party anthem of the year and we bet you won't be able to take your eyes off Ayushmann Khurrana.

The song is going crazy viral and it received over 297,648 views on YouTube within an hour of its release. Check out the song Morni Banke here:

Before the release of the song, both Ayushmann and Sanya gave their fans a sneak peek of their look from the song along with the reminder that the song arrives today. Ayushmann wrote: "Let the celebrations begin, aur yeh gaana toh must hai! Morni Banke comes out tomorrow! Stay tuned!" Sanya, on the other hand, assured her Instafam that "no one will be able to resist dancing this one" and we couldn't have agreed more.

Directed by Amit Ravindernath Sharma, Badhaai Ho depicts the story of a middle aged couple, played by Neena Gupta and Gajraj Rao, with a grown up son (Ayushmann Khurrana), who are about to become parents again. Badhaai Ho also features Surekha Sikri and Sheeba Chaddha and it is slated to release on October 19.