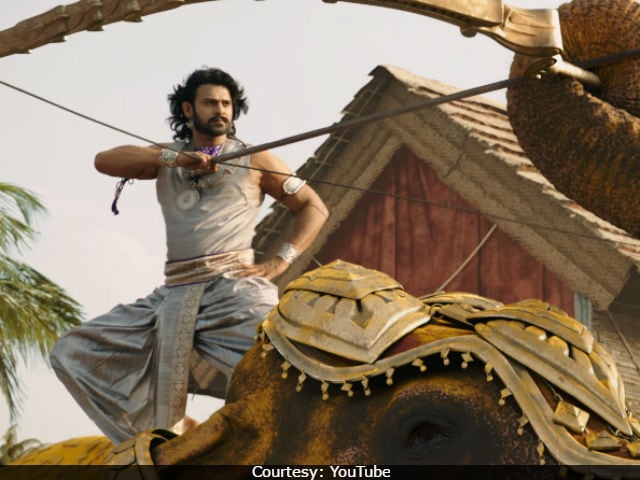 New Delhi: Prabhas fans, rejoice. Filmmaker S S Rajamouli released the video promo of the song, titled Saahore Baahubali. The song celebrates the power of Amarendra Baahubali, played by Prabhas. Saahore Baahubali features the action sequences performed by Prabhas in both the roles. The actor features as Amarendra and Mahendra Baahubali in the film. Interestingly, Daler Mehndi along with M.M. Keeravaani and Mounima, have provided playback for the song. Baahubali: The Conclusion, part 2 of Rajamouli's film, will hit the screens on April 28. The film will track the love story of Amarendra Baahubali and Devasena (Anushka Shetty). Rana Daggubati stars as Bhallala Deva, Sathyaraj as Katappa and Tamannaah Bhatia as Avanthika. Baahubali: The Conclusion is expected to reveal why katappa killed Baahubali in the first part.


Baahubali: The Conclusion, which is the most-anticipated films of the year, was recently in headlines over Sathyaraj's comments on the Cauvery water row several years ago. The Pro-Kannada outfits threatened to ban the film across the state until the actor apologised. However, the matter was resolved after Sathyaraj's apology.

After film's post-production work, Rajamouli in a series of tweets had thanked his team and the actors for making Baahubali possible. Of Prabhas' contribution to the film, he told news agency PTI, "Baahubali was possible because of Prabhas, who being a top hero in south gave three and a half years for the film. I don't think we could've done the film without him."

Promoted
Listen to the latest songs, only on JioSaavn.com
Filmmaker Karan Johar is in charge of the Hindi version of Baahubali: The Conclusion. The film will release across 6,500 screens in Hindi, Tamil, Telugu, Kannada and Malayalam languages.

Baahubali: The Beginning, which hit the screens in 2015, was re-released earlier in April as a part of promotional strategy.