Baahubali: Behind-The-Scenes Pics From Part 1 To Help You Keep Calm And Carry On 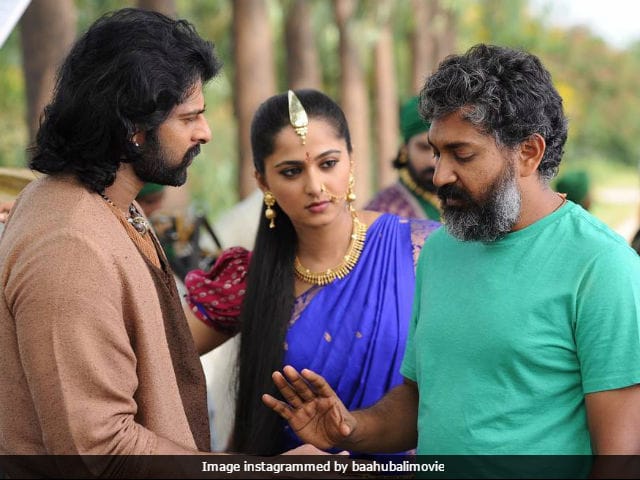 New Delhi: The countdown to the release of S S Rajamouli's Baahubali: The Conclusion has started. The film, starring Prabhas and Rana Daggubati, is releasing this Friday and fans are clicking left, right and center on everything associated to the Baahubali series. So here's more dope but this time from the sets of Baahubali: The Beginning. In one of the pictures, Prabhas and Rana Daggubati engage in a friendly battle for the throne of Mahishmathi while in another Prabhas, as Mahendra Baahubali, poses for a selfie with Anushka Shetty who plays Devasena, his mother. Everyone's favourite Katappa (played by Sathyaraj) is also there. These pictures from the sets of Baahubali: The Beginning are pure gold.

The Birthday boy @RanaDaggubati and #Prabhas, sharing a laugh on the sets of '#Baahubali : The Beginning'

Mahendra Baahubali is on a rescue mission here but there's always time for a selfie. In the first part we met Anushka Shetty only as Baahubali's mother, who was tortured and kept in chains by Bhallala Deva after her husband's death. Devasena was held captive for 25 years before her son rescued her (without knowing their true relationship).

No matter what scene and how busy, great friends always make time for a great selfie!! #BaahubaliMemories

Behind-the-scenes, foes are friends. Actor Nassar, who plays Bhallala Deva's father Bijjaladeva, had a lot to talk about with Devasena, wife of Amarendra Baahubali (Bijjaladeva's nephew).

Our Devasena and Bijjaladeva share a word on the sets of #Baahubali: The Beginning! #BaahubaliMemories

Bijjaladeva and his 'slave' Katappa also chilled together on the sets.

Producer Shobu shares a laugh with our Kattapa and Bijjaladeva. #BaahubaliMemories #Baahubali

This picture is proof that S S Rajamouli left no stone unturned to get the nuances of the action scenes just the right way.

Promoted
Listen to the latest songs, only on JioSaavn.com
It wasn't all work and no play on the sets of Baahubali: The Beginning.

Kamal Haasan Says 'Difficult To Get Another Talent' Like K Viswanath