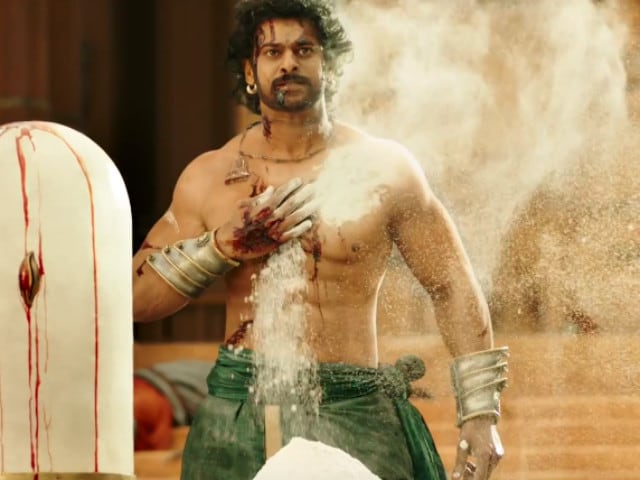 Baahubali: The Conclusion Prabhas in a still from the trailer

New Delhi: The trailer of the Hindi version of Baahubali: The Conclusion, the second part of S S Rajamouli's blockbuster epic drama Baahubali, made our Thursday morning a lot more exciting. The two minute-long trailer features actors Prabhas, Rana Daggubati, Anushka Shetty, Ramya Krishnan and Sathyaraj reprising their roles originally played in Baahubali: The Beginning. The second part is actually a prequel to Baahubali: The Beginning, which is evident in the strikingly noticeable difference in the appearance of the characters as seen in the trailer. Prabhas features in dual roles - both as Mahendra Baahubali and his father Amarendra Baahubali. Meanwhile, Rana steals a substantial amount of the limelight as the younger version of Bhallala Deva, the tyrannical king of the ancient kingdom of Mahishmati. Tamannaah returns as Avanthika while Anushka and Sathyaraj reprise their roles as Devasena and Katappa. Meanwhile, the trailer of the Telugu version of the magnum opus also releases in more than 250 theatres across Andhra Pradesh and Telangana today.

The trailer of Baahubali: The Conclusion also offers snippets of Devasena and Amarendra's romance. In the first part of the magnum opus, Amarendra was declared the emperor of Mahishmati following a glorious victory against invaders. But he was killed and Devasena was thrown into prison by Bhallala Deva, Baahubali's much-discussed anti-hero. The trailer, which promised to reveal why Kattappa killed Baahubali, also drops a major hint but the answer still remains shrouded in mystery.

Watch the trailer of Baahubali: The Conclusion :


Karan Johar's Dharma Production distributes the Hindi version of Rajamouli's National award-winning film. On Thursday, the production house described the trailer aptly on Twitter: "The most awaited trailer of the year is here!"

Ahead of the trailer, director Rajamouli kept us updated with intriguing posters like this:

Promoted
Listen to the latest songs, only on JioSaavn.com
The boy he raised
The man he killed... #Baahubali2pic.twitter.com/hMV4YN5hVn— rajamouli ss (@ssrajamouli) March 11, 2017

Baahubali: The Beginning hit screens in July 2015 and scored more than Rs 650 crore worldwide. Baahubali: The Conclusion is scheduled for April 28 and will release in Tamil, Telugu and Hindi.