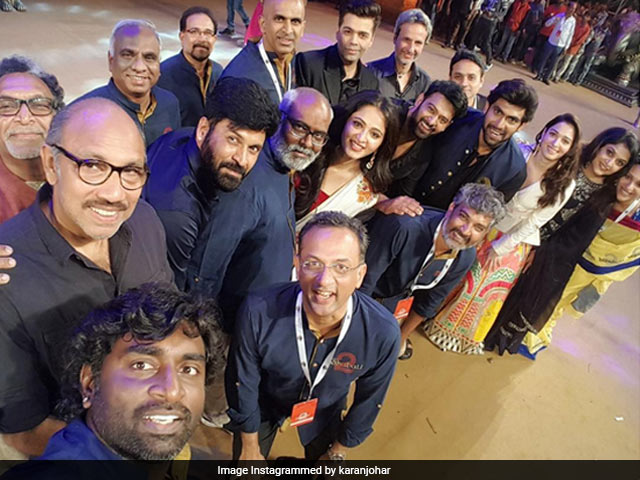 Team Baahubali at the pre-release event in Hyderabad (Courtesy: karanjohar )

New Delhi: Filmmaker Karan Johar, whose Dharma Productions is in charge of the Hindi version of S S Rajamouli's magnum opus Baahubali, said that April will witness the 'biggest movie event,' reports news agency IANS. "When a movie continues to be topical for two years, you know people love every bit of it! Both, exhibitors and film lovers, have approached us to make Baahubali a binge-watching experience," IANS quoted Karan Johar as saying in a statement. A couple of days ago, Mr Johar tweeted that Baahubali: The Beginning will re-release on April 7. "We are re-releasing the first part on April 7 with a special offer that takes care of tickets for both parts. We're excited. April will witness the biggest movie event ever," IANS quoted Mr Johar as saying.

It's time for refresh the memory of this epic!! And for those who haven't seen it! You can't miss this one! Baahubali re releasing 7th April pic.twitter.com/J99VJ3swIx

Baahubali: The Conclusion, part two of Mr Rajamouli's epic fantasy, will release across 6,500 screens in India on April 28. The film features Prabhas in the double role of Amarendra and Mahendra Baahubali, Rana Daggubati as Bhallala Deva and Sathyaraj as Katappa. Anushka Shetty stars as Devasena, Tamannaah Bhatia as Avanthika and Ramya Krishnan as Sivagami. The film is expected to reveal why Katappa killed Baahubali. Baahubali: The Conclusion will track the love story of Amrendra Baahubali and Devasana and Bhallala Deva's rise to power.

Baahubali: The Beginning released to a blockbuster status in 2015. Part 2 is easily the most-anticipated films of the year. Baahubali: 2 has already made a pre-release business of Rs 500 crore through its satellite rights.

Last Sunday, team Baahubali: The Conclusion attended the film's pre-release event in Hyderabad. During the event, the entire cast of the film was introduced on stage. Later, S S Rajamouli, via a series of tweets, thanked the cast, crew and the producers of the film for making Baahubali series possible.

Promoted
Listen to the latest songs, only on JioSaavn.com
Last month, S S Rajamouli revealed that re-releasing the film is their promotional strategy. He told mid-day: "I believe very few people missed it (part 1) but re-releasing the film will pull everyone back into the narrative. We collectively arrived at the decision that it will be great idea to go ahead with a pan-India release."