Thank you for this picture, Tahira Kashyap 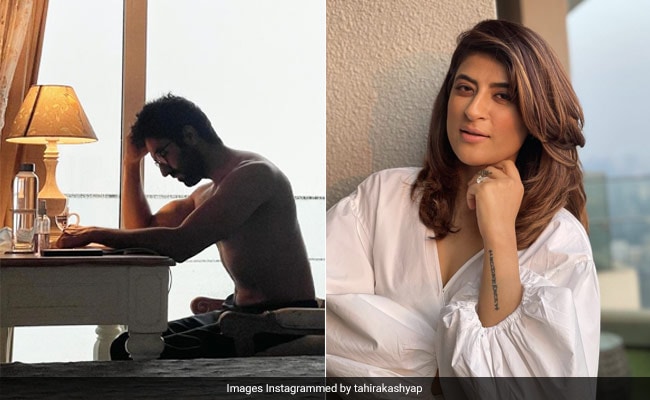 If you are a fan of Ayushmann Khurrana, this is a treat for you. We have found a new picture featuring Ayushmann on social media that will make you go gaga over him, even if you aren't his fan. All thanks to his wife Tahira Kashyap. On Monday, Tahira posted a picture of Ayushmann on Instagram in which the actor can be seen sitting on the chair as he is engrossed in his thoughts. He is presumably writing some lines. Ayushmann is shirtless in the candid frame. The actor is sporting glasses. We also see a glimpse of rain outside the window.

Tahira wrote a sweet caption for her husband Ayushmann in the post. In her caption, Tahira shared a list of "all the things she likes" that includes Ayushmann. Tahira wrote, "all things I like! (Part 2)Chai, kitaab, lamp, study table, rain and this hot boy, Ayushmann Khurrana."

While the post is a treat for Ayushmann's fans, we couldn't ignore musician Rochak Kohli's reaction to it. Rochak wrote a hilarious comment that read, "Mere bhai ke kapde kahan gaye behen (Where are his clothes, sister?)"

Tahira also shared the list of her favourite things in another post. She dropped a picture of herself with her daughter Varushka on the platform. In the picture, Tahira can be seen posing with Varushka in her balcony as they enjoy rain at home. The little munchkin, who is hiding her face in the picture, can be seen wearing a loose white T-shirt and a blue cap. The T-shirt features a picture of Tika The Iggy, the famous Italian greyhound dog whose Instagram and Tik Tok handles have huge fan-following. Tahira wrote, "Hope everyone is safe! Everything fav in this pic- Mumbai rains, chai, the little one, papaya planter and TIKA THE IGGY! We are BIG Tika The Iggy fans.

Coming back to Ayushmann Khurrana, the actor was last seen in Shoojit Sircar's film Gulabo Sitabo alongside Amitabh Bachchan. Ayushmann is now gearing up for movies such as Chandigarh Kare Aashiqui and Anek.