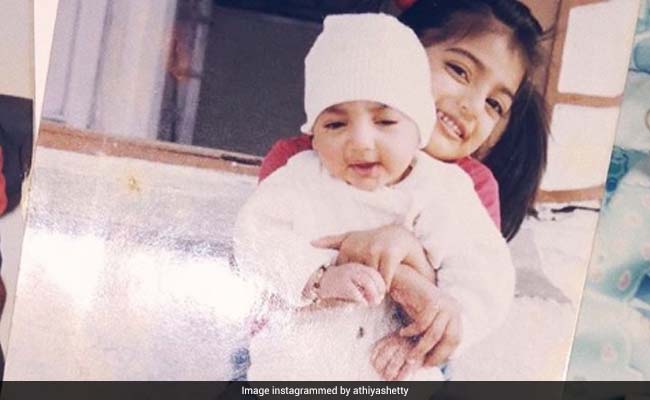 On Ahan Shetty's 23rd birthday, sister Athiya delighted everyone by sharing a wonderful picture from her family photo archive on Instagram. Athiya wished Ahan with a throwback photo of herself with her brother from when they were very, very young. In the picture, Ahan can be seen cradled in Athiya's arms while she is seated on the stairs. "Happy Birthday, my silent but wise one! I love you, how you never trade your authenticity for approval and your ability to be unapologetically yourself, and real. Happiness and love always. FYI, I most definitely dropped you right after this picture was taken," Athiya captioned the photo. Ahan Shetty is the younger of actor Suniel and Mana Shetty's two children. Athiya is the couple's elder child.

Take a look at the photo shared by Athiya Shetty:

Happy Birthday, my silent but wise one! I love you, how you never trade your authenticity for approval and your ability to be unapologetically yourself, and real. Happiness and love always . FYI, I most definitely dropped you right after this picture was taken

Ahan Shetty will make his Bollywood debut soon with the Hindi remake of Telugu hit RX 100. Speaking about Ahan's upcoming project, Suniel Shetty said that the film will go on floors soon. He is a simple boy and God has been kind to him. He will start shooting his film soon. He has associated with a good script, producer and director in his debut film," Suniel Shetty told in an interview to news agency IANS. Ahan's debut film is scheduled to release on May 2019.

Meanwhile, Athiya Shetty, who was last seen in 2017's Mubarakan, has started shooting for her next film Motichoor Chaknachoor, which also features Nawazuddin Siddiqui. Sharing deets about his daughter's upcoming films, Suniel Shetty had earlier said: ""Athiya has signed three to four films. She has started shooting for Motichoor Chaknachoor in Bhopal. She is very excited and happy, so I am feeling satisfied that she is doing quality work." Salman Khan had launched Athiya Shetty and Aditya Pancholi's son Sooraj with Hero, which released in 2015.