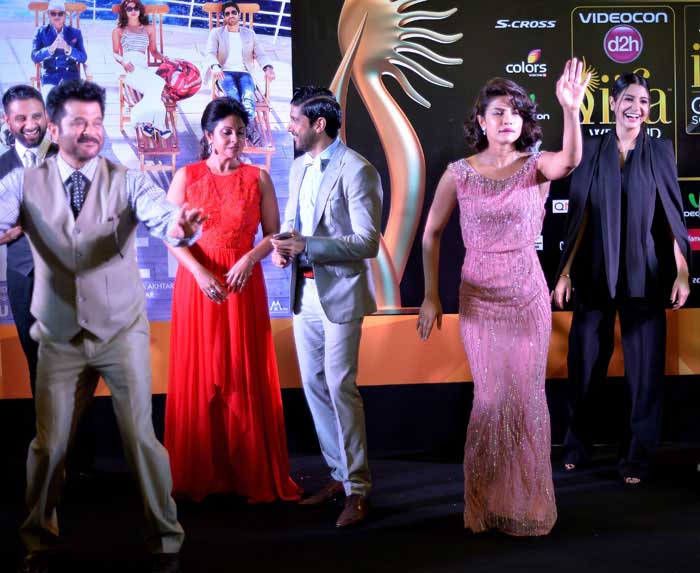 Priyanka Chopra, Anil Kapoor, Shefali Shah, Farhan Akhtar and Anushka Sharma on the green carpet at the screening of their movie Dil Dhadakne Do in Kuala Lumpur on June 6. Image courtesy: AFP

Kuala Lumpur: The cast and crew of Dil Dhadakne Do kept their date with Malaysia as they arrived to an overwhelming welcome in Kuala Lumpur with fans lining up five floors of the Suria KLCC mall.

Priyanka Chopra, dazzling in a backless pink silver gown, shook a leg with her on-screen dad Anil Kapoor much to the merriment of the viewers.

As she joked about where would anyone get a good looking cast as this, Priyanka also said this was perhaps the last day the entire cast was coming to together since Malaysia was the last stop.

Meanwhile, Priyanka's co-star Farhan Akhtar joked that he was relieved Priyanka joined the team after Mary Kom since the film's scenes required her to bash him and by the time she came to that, her muscle tone had gone, else he would have received 'the beating of his life.'

Ranveer Singh, who took time off to bring in Prakash Padukone's birthday in Bangalore, was expected later at the premiere, but his co-star from the film, Anushka Sharma, who appeared in all-black slim fit pants and a flowing jacket top, said the soul of Dil Dhadakne Do was that it spoke of empowerment and equality.

So who was the toughest member on sets? Director Zoya Akhtar's response was, "Pluto Mehra."