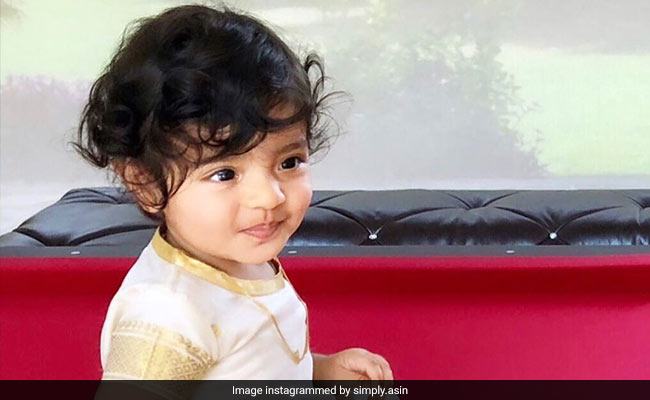 Asin wished her fans on Onam in the most adorable way possible. The 33-year-old actress dug out a few pictures from last year's harvest festival and shared it with her Instafam, on Wednesday. One of the pictures shared by Asin features her little daughter Arin, who can be seen dressed in traditional white and gold outfit as she shyly smiles at the camera. In her post, Asin revealed that the picture happens to be from last year's Onam, when her daughter Arin was about 10-months-old. The caption on Asin's post read, "Throwback to last year - Arin's first Onam, 10-months-old. Our little princess."

Check out the picture, you can thank us later:

In a separate post, the Ghajini actress shared a picture (also a throwback) of herself along with her husband Rahul Sharma. She captioned the post: "Throwback to last year. First Onam as parents."

Asin married industrialist Rahul Sharma in the year 2016. The couple welcomed their first child - Arin in October last year. Arin frequently makes appearances on her mother's Instagram account and we love it when that happens.

Here are some of our favourite pictures of Arin:

Asin stepped into the Indian entertainment industry with the 2001 Malayalam film Narendran Makan Jayakanthan Vaka. She has been a part of Telugu films like Sivamani and Gharshana, Tamil films like Majaa and Pokkiri . Asin is best-known for starring in the Tamil and the Hindi version of Ghajini. The Hindi version of the film starred Aamir Khan in the lead role.