"A challenging part in a film, needs me to push the envelope," wrote Arjun Rampal 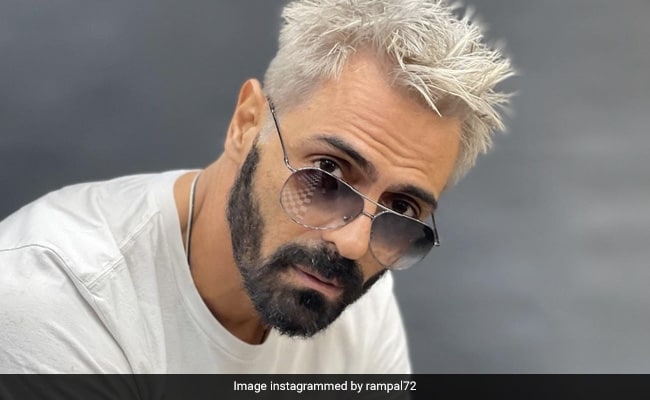 Ooh la la. Hello there, Arjun Rampal. The 48-year-old actor plays an interesting role in his upcoming movie Dhaakad. While Kangana Ranaut plays a Rambo-esque soldier in Dhaakad, Arjun Rampal has been cast as a villainous antagonist named Rudraveer. Arjun Rampal, who wrapped a schedule of the film in February, is gearing up for the next one and he started the prep with a look change. On Friday, Arjun Rampal shared glimpses of his new look on Instagram, sending his fans into a tizzy. For his role in Dhaakad, Arjun now sports grey hair styled in spikes - his black beard adds a dramatic contrast to the look.

Arjun Rampal assigned courtesy to celebrity hairstylist Aamir Hakim for his look. Here's what the Dhaakad actor posted on Instagram: "A challenging part in a film, needs me to push the envelope. Thank you my brother Aalim Hakim for helping me create that and Razneesh Razy Ghai to realise that dream."

In January, Arjun Rampal introduced his character from Dhaakad with this post: "Boom. Evil has a new name - Rudraveer! Super excited to essay an antagonist who is dangerous, deadly and cool at the same time! Here's my look for Dhaakad."

Earlier this year, the film's team were shooting in Madhya Pradesh and they wrapped the schedule in February. "Just superb! One of the most amazing team I have had the pleasure to work with. Thank you guys will miss you till the next schedule. Rudraveer is one mad character," Arjun Rampal wrote as the schedule wrapped.

Dhaakad was initially scheduled for a Diwali 2020 release but has been delayed because of the pandemic situation. Dhaakad is now expected to release in cinemas on October 1.