Meet The Newest "Boy Band" In B-Town, All Thanks To Arjun Kapoor And Designer Kunal Rawal 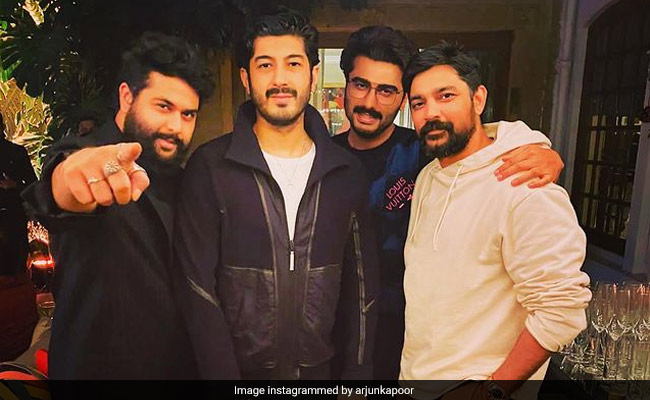 Arjun Kapoor loves to keep things simple and real on social media. The actor is often seen dropping the wisest of life lessons with a tinge of humour. And no one can really beat Arjun Kapoor when it comes to funny pics and posts. Now, the actor has shared a photo with his cousin Mohit Marwah, director Karan Boolani – who is married to Arjun Kapoor's cousin Rhea Kapoor – and designer Kunal Rawal. While Arjun Kapoor, Mohit Marwah, and Karan Boolani look dapper in the image, a rather enthusiastic Kunal Rawal is seen pointing at the camera with a hint of a smile on his face. Addressing Kunal's pose, Arjun Kapoor said, “One of these four people is posing for a boyband cover. I'll let you guess who…”

It took no time for fans to drop Kunal Rawal's name in the comments section. Joining in the banter, Kunal Rawal said, “Juan Direction,” making a pun on the name of the famous boy band, One Direction.

Arjun Kapoor often gives fans a peek at the quality time he spends with his loved ones. Recently, on the occasion of his uncle, actor Anil Kapoor's birthday, the actor penned a poem for the star and referred at length to Anil Kapoor's youthful looks and vigour. An excerpt from his rather funny poem reads, “He ages like fine wine; And makes all other actors whine.” The post features Arjun Kapoor's pictures as a child leading up to his present self and even what he will look like in 2060. What remains constant is Anil Kapoor through the ages.

For the unversed, Anil Kapoor is the brother of Arjun Kapoor's dad, producer Boney Kapoor.

Before that on the occasion of dad Boney Kapoor's birthday, Arjun Kapoor shared a throwback photo with his dad and sister Anshula Kapoor. In the caption, Arjun Kapoor said, “Being selfless isn't something one can be taught; it's an inbuilt machinery that exists among very few people, I happen to be the son of one of those people... I've seen and heard stories of dad going out of his way to help find solutions for others and forgetting to help himself and fulfilling his needs before all that... it's not easy being selfless and surviving.”

On the work front, Arjun Kapoor was last seen in Bhoot Police. His upcoming films include Ek Villain Returns and Kuttey.