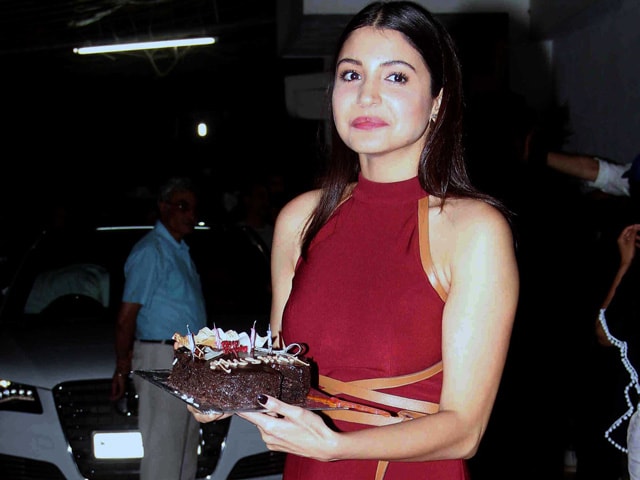 Anushka at the special screening of Bombay Velvet

New Delhi: Fans who were rooting for Anushka Sharma and Virat Kohli's romantic dinner date on the actresses birthday on May 1, are in for a small disappointment.

Anushka celebrated her 27th birthday with the 'Fab & Super Talented Boys of #bomabyVelvet'. The actress posted this picture on Twitter, where she posed with her co-stars from the film - Ranbir Kapoor and Karan Johar - and director Anurag Kashyap. She was also joined by her other friends, including actor Vivaan Shah, who was last seen in Happy New Year.

Ending birthday with the fab & super talented boys of #bomabyVelvet . Had a great day ! Loads of love 😘 pic.twitter.com/VhVfeyphfz

Anushka cut a pretty picture in a maroon Nikhil Thampi dress at the screening as she posed with 'bigshot' Ranbir, who opted for a semi-casual look.

Filmmakers Vikas Bahl and Vikramaditya Motwane, who have co-produced the film with Fox Stars Studio were also at the screening. Their Phantom Films partner Madhu Maneta came with his fiancée, designer Masaba Gupta.

Post the screening Anushka also celebrated her birthday with the media with full enthusiasm.

Promoted
Listen to the latest songs, only on JioSaavn.com
Anushka also shared an image of a special birthday gift form her manager ('damager'):

From my darling manager/Damager 😋@ritikanagpal . Love it !! 😁 although we are both wondering about the choo's 😮 pic.twitter.com/kxCMltWJRX