"I came to shower my love on them, but Anushka Sharma and Virat Kohli showered more love on me" 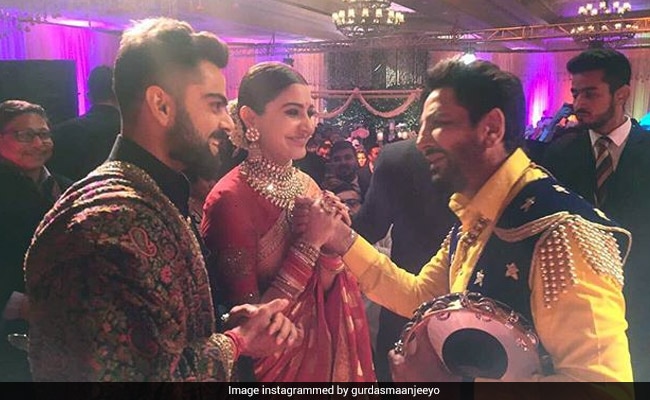 Anushka and Virat at their Delhi reception (courtesy gurdasmaanjeeyo)

New Delhi: Anushka Sharma and Virat Kohli are heading towards their much-awaited Mumbai reception on December 26 but fond memories from the recently held big fat Punjabi reception in New Delhi continue to crop up on social media. For example, the photo shared by Punjabi singer Gurdas Maan, with which he wished the couple a happy married life. Videos from the Anushka-Virat reception in Delhi eventually found their way to social media and are proof that Virushka are true blue Punjabis by nature - they danced like no one's watching and did bhangra while Gurdas Maan livened the evening up. Bhangra-shangra done, this is what the singer posted on his social media handles.

Apart from dancing with Virat, Anushka had another favourite dance partner in Aesha Dhawan, cricketer Shikhar Dhawan's wife. The new bride also set the dance floor on fire to Bollywood numbers and joining her on stage was Shikhar Dhawan this time. Here are all the dancing shancing you need to see from the very Punjabi Virushka reception.

Promoted
Listen to the latest songs, only on JioSaavn.com
The highlight of Anushka Sharma and Virat Kohli's Delhi reception was the arrival of Prime Minister Narendra Modi. The power couple resorted to their favourite designer - Sabyasachi - for their Delhi reception wardrobe - Anushka was resplendent in a red benarasi sari while Virat opted for a silk textured bandhgala with a kurta set.

Virat and Anushka married in Tuscany Italy on December 11 and had touched down in Delhi after their honeymoon in a secret wonderland. On Friday, they flew back to destination Mumbai and are currently prepping for their final reception on December 26. Anushka and Virat will travel to South Africa soon on December 27, where Virat will prepare for an upcoming series. Anushka will ring in New Year with her husband and return in early 2018 to complete her pending work commitments -a film with Aanand L Rai, YRF's Sui Dhaaga and the promotions of Pari.