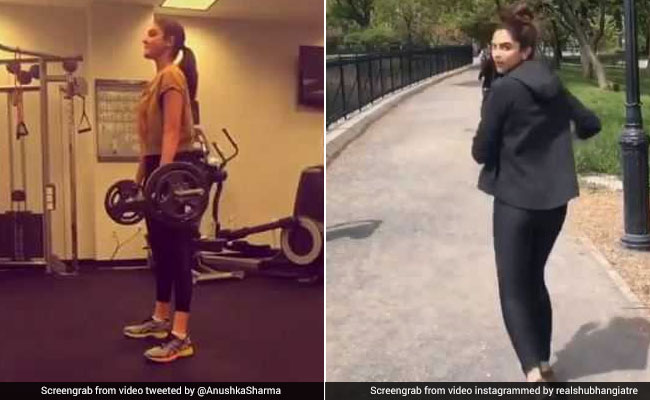 New Delhi: Actresses Anushka Sharma and Deepika Padukone have posted their responses to the fitness challenge, a social media campaign initially started by Union Minister Rajyavardhan Singh Rathore. Anushka responded to husband Virat Kohli's challenge while Deepika was nominated by badminton player PV Sindhu. Anushka tweeted a video of herself lifting weight and further nominated squash player Dipika Pallikal and actor Varun Dhawan to take up the challenge. "I accept your fitness challenge and will show you what's my favourite workout andeed hope that you try it out," Anushka, 30, says in the video. "Great initiative, Rajyavardhan Singh Rathore sir," read an excerpt from her tweet.

I accept your challenge @imVKohli. Here's my video for the #HumFitTohIndiaFit#FitnessChallenge. I'd like to nominate my friends, @DipikaPallikal and @Varun_dvn Great initiative @Ra_THORe sir! #ComeOutAndPlaypic.twitter.com/SmdmkArT6U

Deepika Padukone shared a video of herself and wrote, "I am extremely passionate about fitness and my new obsession...running." She nominated sports personalities Mithali Raj, Rani Rampal and Aditi Ashok.

Virat Kohli had posted this.

I have accepted the #FitnessChallenge by @ra_THORe sir. Now I would like to challenge my wife @AnushkaSharma , our PM @narendramodi ji and @msdhoni Bhai for the same. #HumFitTohIndiaFit#ComeOutAndPlaypic.twitter.com/e9BAToE6bg

This morning, PM Modi also tweeted his response to Virat's challenge and said that he will share his own fitness video soon.

Challenge accepted, Virat! I will be sharing my own #FitnessChallenge video soon. @imVkohli#HumFitTohIndiaFithttps://t.co/qdc1JabCYb

Virat, actor Hrithik Roshan and badminton player Saina Nehwal were the first three personalities who were tagged by Mr Rathore in his tweet. He had posted a video of himself doing push-ups in his office.

Post pictures and videos of how you keep yourself fit and send a #FitnessChallenge to your friends on social media. Here's my video and I challenge @iHrithik, @imVkohli & @NSaina to join in pic.twitter.com/pYhRY1lNEm— Rajyavardhan Rathore (@Ra_THORe) May 22, 2018

Hrithik soon responded in kind and nominated Tiger Shroff, Kunal Kapoor and his parents to take up the challenge.

This initiative makes me so proud ! Bravo @Ra_THORe#HumFitTohIndiaFit#FitnessChallenge this is how I commute to my office everyday. sitting static in a car is such a waste. Walk, cycle, jog, feel the earth, feel India get FIT! pic.twitter.com/twoI1vna9c

Thank u so much @Ra_THORe sir for challenging me ..#HumFitTohIndiaFit

Promoted
Listen to the latest songs, only on JioSaavn.com
Post pictures and videos of how you keep yourself fit and send a #FitnessChallenge to your friends on social media. Here's my video and I challenge @RanaDaggubati@Pvsindhu1 and @GautamGambhirpic.twitter.com/XEaJ9tPj2W— Saina Nehwal (@NSaina) May 22, 2018

Meantime, Anushka is currently in the US, where she's filming Zero, also starring Shah Rukh Khan and Katrina Kaif. Varun Dhawan is her co-star in Sui Dhaaga, which releases this September. Deepika was last seen in "Padmaavat" and recently attended the Cannes Film Festival.