"It revived so many beautiful memories and instilled in me such a strong feeling of hope and compassion," wrote Anupam Kher 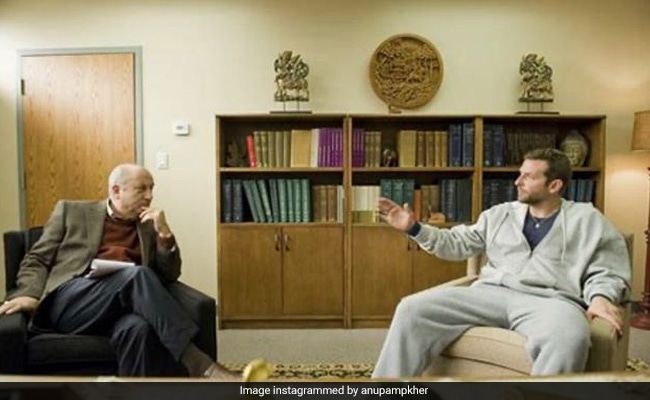 Anupam Kher just made our Sunday better, courtesy the director of Silver Linings Playbook, David O Russell. The veteran actor shared a throwback picture featuring none other than Bradley Cooper from their 2012 romantic-drama Silver Linings Playbook and took us back in time. Sharing the priceless snippet from the movie where Anupam Kher and Bradley Cooper can be seen sitting inside a room and engrossed in a conversation with each other, Anupam wrote, "My director and dearest friend David O Russell sent me this pic of Bradley Cooper and me today, from our movie Silver Linings Playbook." Referring to the ongoing coronavirus pandemic that has confined people inside their homes and is making everyone face a difficult time, Anupam Kher wrote, "It revived so many beautiful memories and instilled in me such a strong feeling of hope and compassion in the times we are living in. Thank you David!" Take a look:

My director and dearest friend #DavidORussell sent me this pic of #BradleyCooper and me today from our movie #SilverLiningsPlaybook. It revived so many beautiful memories and instilled in me such a strong feeling of hope and compassion in the times we are living in. Thank you David!!

Written and directed by David O Russell, Silver Linings Playbook was adapted from Matthew Quick's 2008 novel The Silver Linings Playbook. Headlined by Bradley Cooper and Jennifer Lawrence, the film traced the story of a divorced man with bipolar-disorder who tried to win back his estranged wife. Meanwhile, he met a young widow he eventually grew close to. As their relationship became stronger, the man, his psychiatrist and his father tried to examine their relationships with each other as they coped with their problems. Bradley Cooper played the role of the divorced man with bipolar disorder while Anupam Kher played the role of his psychiatrist, in the film

Besides Bradley Cooper, Anupam Kher and Jennifer Lawrence, Silver Linings Playbok also featured Robert De Niro, Jacki Weaver, Chris Tucker and Julia Stiles in leading roles. The film released in 2012 and was both a critical and a commercial hit.