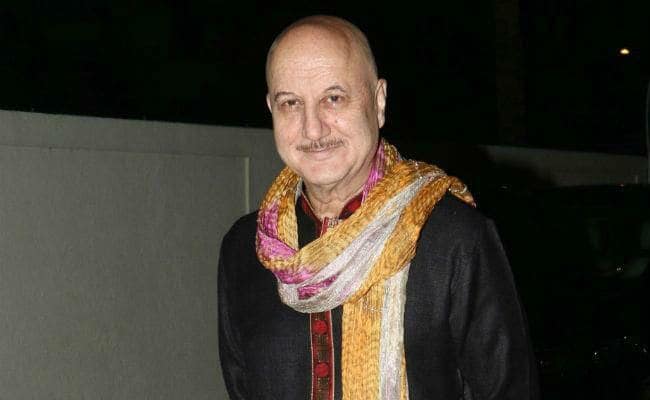 Veteran actor Anupam Kher resigned as the chairman of top film school Film And Television Institute Of India (FTII), he said in a tweet on Wednesday. Mr Kher stepped down from his post due to his commitments to international projects, which he is associated with at the moment. Mr Kher currently features as a part of the primary cast of ongoing US TV show New Amsterdam. In his tweet, Mr Kher attached a copy of his resignation letter to Information and Broadcasting Minister Rajyavardhan Singh Rathore and wrote: "It has been an honour, a privilege and a great learning experience to be the Chairman of the prestigious FTII. But because of my international assignments I won't have much time to devote at the institute. Hence, decided to send my resignation. Thank you."

In his resignation letter, which has been accepted, Mr Kher said he decided to quit as FTII's chairman as he will have to be stationed in the US for "nearly nine months between 2018 and 2019 and then, for a similar period for a minimum of three years more." Without naming the show in concern, which appears to be New Amsterdam, Mr Kher added that the change in his work schedule happened after the makers decided to extend the show by four months.

"Given this assignment it would not be fair to me, the students and management team, for me to hold a position of such responsibility and accountability, without being actively involved in the operations," read the second part of his resignation letter.

It has been an honour, a privilege & a great learning experience to be the Chairman of the prestigious @FTIIOfficial. But because of my international assignments I won't have much time to devote at the institute. Hence decided to send my resignation. Thank you. @Ra_THORepic.twitter.com/lglcREeYM2

"Thank you staff, teachers and students of FTII for your support and appreciation during my tenure as chairman. As an individual you can always reach out to me. We have constituted a very learned and capable governing body and academic society who will guide you at their best," Mr Kher added in a note of thanks.

Thank you staff, teachers & students of @FTIIOfficial for your support & appreciation during my tenure as chairman. As an individual you can always reach out to me. We have constituted a very learned & capable governing body & academic society who will guide you at their best.

Within just a few days after Mr Kher was appointment as the FTII chairman, students sent an open letter to Mr Kher, asking him to address nine key issues of concern. Soon after, Anupam Kher featured in headlines after he made a surprise visit to the film school in Pune. In a live video on social media, Mr Kher had said: "I didn't want to go there feeling important, and feeling 'Oh my God, now I have done 508 films and I have been in movies for 33 years, I have done more than 120 plays.' I wanted to go there as a humble student."

Meanwhile, NBC's New Amsterdam, starring Anupam Kher, premiered on September 25 this year and also includes names such as Ryan Eggold, Janet Montgomery, Freema Agyeman, Jocko Sims and Tyler Labine in the primary cast. Anupam Kher has also been part of Canadian TV show The Indian Detective, which is expected to resume its second season. In the past, Anupam Kher has been part of several international projects such as 2002's Bend It Like Beckham and the Oscar-winning Silver Linings Playbook. This year, Mr Kher was named in BAFTA nominations in the Supporting Role category for his role in British TV show The Boy With The Topknot.