"Thank you for the time spent, the gyan to the kids which made such an impact," wrote the actress for Anupam Kher 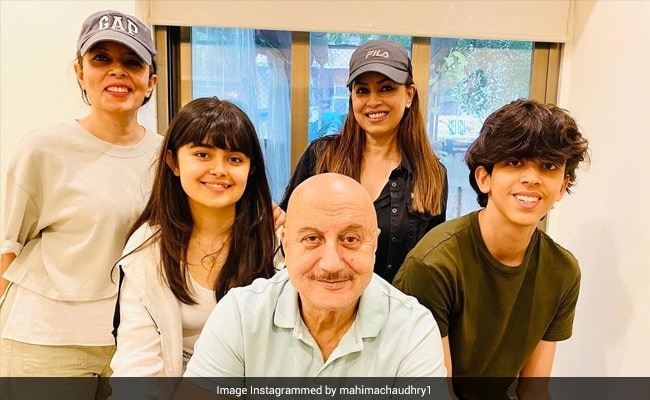 Actress Mahima Chaudhry recently met her Dhadkan co-star Anupam Kher and updated her Instagram feed with pictures from their get-together. Anupam Kher played the role of Mahima Chaudhry's character's father in the 2000 film. Sharing pictures of herself and the actor with her family - daughter Ariana, sister Akansha and sister's son Ryan - Mahima Chaudhry wrote a heartwarming note for Anupam Kher. Her caption read: "All smiles when you are around, Anupam Kher. You carry joy with you. Thank you for the time spent, the gyan to the kids which made such an impact. Lots of love."

Anupam Kher and Mahima Chaudhry's Dhadkan, directed by Dharmesh Darshan, released on August 11 in 2000 and it starred Akshay Kumar, Shilpa Shetty and Suniel Shetty in the lead roles. It showcased the love triangle between Akshay, Shilpa and Suniel Shetty.

In terms of work, Anupam Kher, who is a film and theatre actor, was last seen in the 2019 crime-thriller One Day: Justice Delivered in which he co-starred with Esha Gupta, Kumud Mishra and Anusmriti Sarkar. The actor has worked in several hits like Saaransh, Ram Lakhan, Lamhe, Darr, Dilwale Dulhaniya Le Jayenge, Maine Gandhi Ko Nahin Mara, Baby and Special 26, to name a few.

Mahima Chaudhary, known for her performance in the 1997 hit Pardes, has starred in other films like Daag: The Fire, Pyaar Koi Khel Nahin, Deewane, Kurukshetra, Om Jai Jagadish and Dil Hai Tumhaara. She was last seen in the 2016 film Dark Chocolate.