Anupam Kher said, "I thought it will be a political film and I didn't know what will be there in the film" 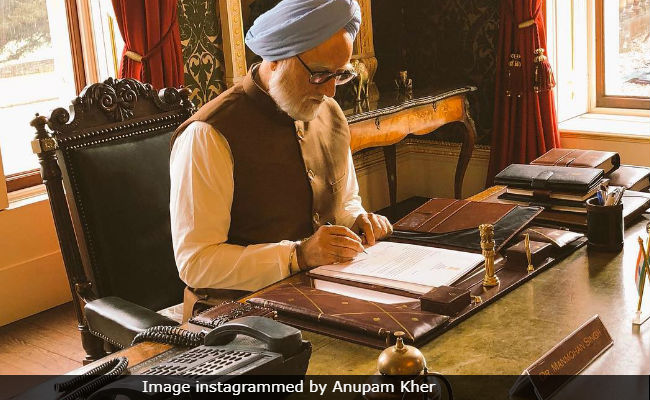 Actor Anupam Kher, who is gearing up for the release of his forthcoming film The Accidental Prime Minister, has said that initially he didn't want to be a part of the project as he thought that it will be politically controversial film. Anupam Kher was interacting with the media at the trailer launch of The Accidental Prime Ministeralong with his co-actor Akshaye Khanna, producer Jayantilal Gada, Sunil Bohra and director Vijay Ratnakar Gutte on Thursday in Mumbai. The film stars Anupam Kher as Manmohan Singh, the economist and politician who served as the Prime Minister of India from 2004 to 2014 under the United Progressive Alliance.

"About one-and-a-half years back, my friend Ashok Pandit told me that there is a film being made on Dr Manmohan Singh and of course everybody heard about the book and the controversy behind the book. So, my first reaction was that I shouldn't be part of this film because of so many reasons," he said.

"I thought it will be a political film and I didn't know what will be there in the film. The other thing is that it is not easy to portray Dr Manmohan Singh because he is an active political personality. This film is not based on political figure who belonged to 1960s or 1970s era. When Vijay and Mr Bohra came to meet me so, for the first one or two months, I told them that I didn't want to be part of it," he added.

Anupam Kher added that the role of Dr Manmohan Singh challenged him as an actor. "One day, I saw Dr Manmohan Singh walking from one place to another on the television. So, the actor inside me told me if I could walk like him. But I was a disaster. That challenged me. I rehearsed his walk for 45 minutes but I couldn't get it right so, I called the makers for the narration of the script and I was very fascinated by it."

"I feel everything is difficult about Dr Manmohan Singh. He has very monotonous voice and yet there has to be variations then, I said yes to the makers of film," he added.

Talking about preparations he did to play role of Dr Manmohan Singh, Anupam Kher said, "I took about six to seven months to prepare for this role. I must have seen at least 100 hours of footage but the most difficult was the voice part of it because he has a typical voice. Then I told myself that if your work is not challenging then, what's the benefit to do it?"

"We did the first schedule in England of 40 days and during that time, we were in a secluded place. It used to take one-and-a-half hours to look like Dr Manmohan Singh. I feel it's the most difficult role I have done in my life because Dr Manmohan Singh is known by everybody and even today, he is so active. He is more vocal now than he was in year 2014," he added.

When asked whether he is worried that this film can be opposed by Congress as the makers have shown a controversial relationship between Dr Singh and the Congress party, he said, "I feel you have to be little more careful because people take only two minutes to criticize you. I feel this has to be perceived as a film and it shouldn't get into controversy because of its political background because you need to have guts to make this film and I must say our director and producers have the guts."

The Accidental Prime Minister is a biographical political drama film, presented by Rudra Production (UK), Bohra Bros in association with Dr Jayantilal Gada (Pen India Limited). It is directed by Vijay Ratnakar Gutte and written by Mayank Tewari. The film is based on the 2014 memoir of the same name by Sanjaya Baru.

The Accidental Prime Minister will hit cinemas on January 11.

(Except for the headline, this story has not been edited by NDTV staff and is published from a syndicated feed.)
Comments
accidental prime minister traileranupam khermanmohan singh