"It is okay to be covered in stretch marks, it is normal to have cellulite and texture, skin is meant to fold and roll," wrote Anshula Kapoor 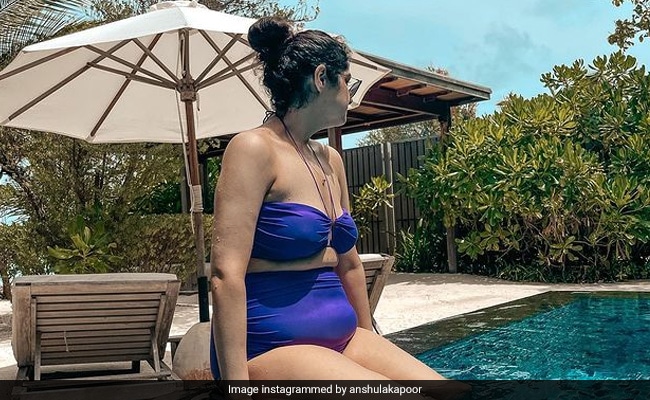 Anshula Kapoor shared an empowering post on body-positivity on social media on Friday. Anshula stated in her extensive caption that she was hesitant about posting a picture of herself in swimwear but she has come a long way - she is "still un-learning to hate" her body. Anshula began the note with these words: "3 months ago I remember having a conversation with Priyam about swimming costumes, and I remember telling her I would never wear a bikini, I just couldn't pull it off and I don't have the confidence to be comfortable in one. Her response was simple - "why not? I think you should totally wear one". Why was I hesitant? Because I'm so used to thinking that I need a particular body type to be able to wear certain clothes... I'm so conditioned to wanting to hide my body and "play it safe", its like my default setting is to always be like "no, I can't pull that off." And I'm learning to change this."

Anshula Kapoor  wrote about celebrating her body and added in her caption: "This image has been sitting in my drafts for a couple of weeks, because I still have what we call bad body image days. And on days like that I convince myself that only "perfect" photos belong on the feed... I'm still learning to un-hate my body, I'm learning to be okay with my body even on days when she's bloated or not looking her best. It is okay to be covered in stretch marks, it is normal to have cellulite and texture, skin is meant to fold and roll, and my FUPA is always going to be a part of me and that's okay too."

Feeling "confident and comfortable" in her own skin, Anshula Kapoor wrote about how this picture will always be a reminder of one of "her favourite days" from her holiday. "I'm glad I took a chance and bought the bikini. This was one of my favorite days on our holiday.. I felt confident, I felt comfortable in my own skin. This is me chasing joy instead of perfection. And I actually can't wait to wear this bikini again," she wrote.

Anshula Kapoor signed off the post with these words: "If you've ever wanted to wear something that you've liked on someone else but you've convinced yourself not to, maybe it's time to just chase joy and listen to your heart?"

Anshula and Arjun Kapoor are film producer Boney Kapoor's children with his first wife Mona Shourie, who died in 2012. Janhvi and Khushi are Boney Kapoor's children with his second wife Sridevi, who died in February 2018. Anshula Kapoor started an online fundraising platform called Fankind in 2019. Arjun and Janhvi Kapoor are both Bollywood actors, while Khushi will make her Bollywood debut with Zoya Akhtar's adaptation ofThe Archies.