Ankita Lokhande And Vicky Jain Are Celebrating 6 Months Of Being Married. See Pics 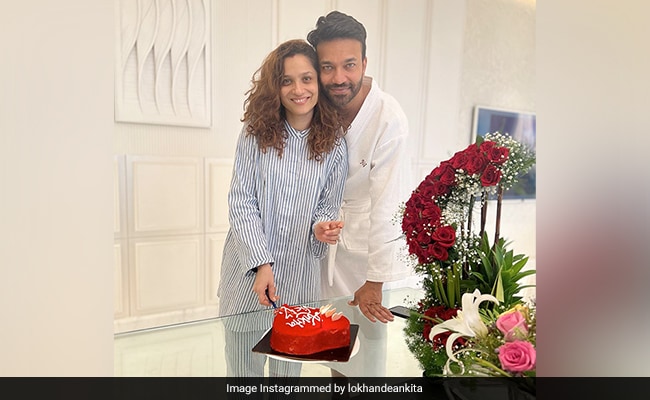 Ankita Lokhande and Vicky Jain celebrate their six-month anniversary today. The couple got married last year. Sharing pictures from low-key celebrations with family members, Ankita Lokhande wrote in her post: "Happy 6 months to us baby." She added in her caption: "Thank you family to making it so special. Love u guys... special thanks to my lovely bhabhi for making it so memorable. I m already missing everyone. Jaldi aana wapas.. lots of love Riya Vivaan chachi is missing you." The couple got married last year after dating for a few years.

Ankita Lokhande and Vicky Jain frequently share mushy posts on Instagram. Posting this reel with Vicky Jain, she wrote: "Love isn't something you find. It's something that finds you."

The TV star shared glimpses of her house and she wrote: "I am capable of creating the life of my dreams with you. Are you ready Mr Jain?"

Ankita Lokhande married Vicky Jain in December last year. She shared pictures from her wedding and wrote:"Love is patient but we're not. Surprise! We're now officially Mr and Mrs Jain."

The actress became a household name after she starred as Archana in the popular television show Pavitra Rishta. Besides Pavitra Rishta, Ankita has featured in shows such as Ek Thhi Naayka and Shakti - Astitva Ke Ehsaas Ki.

Ankita Lokhande stepped into Bollywood in 2019 with Kangana Ranaut's Manikarnika: The Queen Of Jhansi. She also starred in Baaghi 3, which featured Tiger Shroff in the titular role. Ankita Lokhande was also a participant in TV reality shows like Jhalak Dikhhla Jaa and Comedy Circus.

Koffee With Karan 7: Sara Ali Khan And Janhvi Kapoor's Very "Cheesy" Episode With A Side Of Vijay Deverakonda