Mourning Dilip Kumar, Anil Kapoor took a trip down memory lane and dug out some priceless behind-the-scenes memories with the late actor 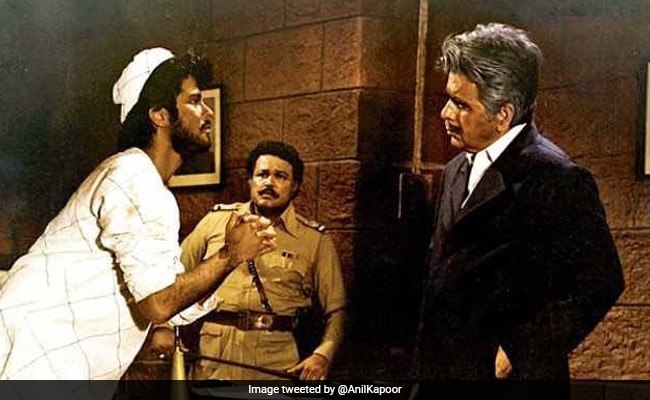 Anil Kapoor with Dilip Kumar in a throwback (courtesy AnilKapoor)

Legendary actor Dilip Kumar's death was mourned by stars across generations, some of who had been the late actor's co-stars - Anil Kapoor is one among them. The 64-year-old actor paid a heart-warming tribute to the cinema icon, remembering him as one of the "biggest stars" of India cinema. Anil Kapoor, who stepped into Bollywood in the 1980s, eventually co-starred with Dilip Kumar in three of his films. Ahead of his full-fledged debut in a lead role, Anil Kapoor played a supporting role in Dilip Kumar's 1982 movie Shakti, also co-starring Amitabh Bachchan. Anil Kapoor also worked with Dilip Kumar in Yash Chopra's 1984's Mashaal and 1986 film Karma, also starring Jackie Shroff.

Mourning Dilip Kumar, Anil Kapoor took a trip down memory lane and dug out some priceless behind-the-scenes memories with the late actor. In his tribute to Dilip Kumar, Anil Kapoor wrote: "Our world is a little less bright today because one of our biggest stars has left us for the heavens. Dilip Sahab was very close to my father and I had tremendous honour of sharing screen-space with him in three of my most memorable films... He was and will always be the finest and greatest actor of our industry for me... he has inspired generations of artists. Rest in peace, Dilip Sahab. You remain in our minds and hearts forever." Anil Kapoor's father Surinder Kapoor was a film producer, who also worked as an assistant director for Dilip Kumar's legendary 1960 film Mughal-e-Azam.