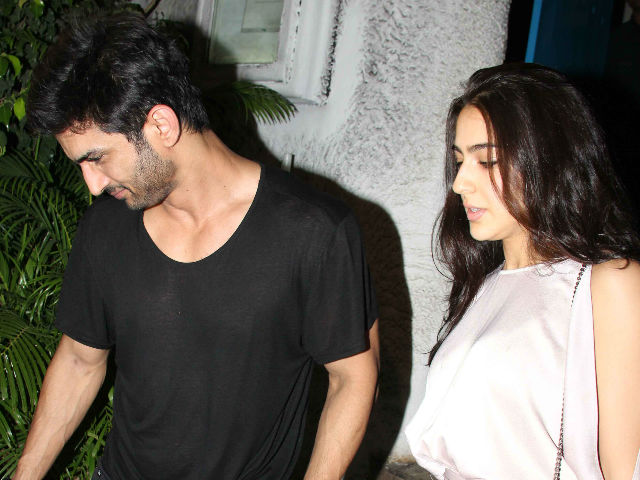 New Delhi: The first motion poster of Sushant Singh Rajput and Sara Ali Khan's forthcoming film Kedarnath has been released. The 19-second teaser shows a trident or Lord Shiva's Trishul and the Himalayas in the background. The poster is captioned, 'Love is a pilgrimage.' Kedarnath is a lover story directed by Abhishek Kapoor. Kedarnath is Sara's debut film. She is the daughter of actors Saif Ali Khan and ex-wife Amrita Singh. Earlier in June, Sushant and Sara made headlines when they got pictured together with Amrita Singh and Abhishek Kapoor at a Mumbai restaurant. Later, Sara accompanied Abhishek to Kedarnath for a recce. Meanwhile, here's the first motion poster of Sushant and Sara's Kedarnath.


Of the film, Abhishek Kapoor earlier said, "Kedarnath is a love story set on a pilgrimage. I believe it is important to look inwards as filmmakers and soak in the vast beauty of this country, its culture and its stories. Our country is a treasure trove of spiritual experiences, and I would like to present that to our people. I believe Kedarnath is a story that the world will want to watch."

A day ago, Abhishek posted a picture of his lead actors from a script reading session.

Sara's debut film kept the Internet interested for a very long time. There were reports that she was being launched by Karan Johar and that Hrithik Roshan will be her first co-star. Later, she was also rumoured to co-star with Tiger Shroff in Student Of The Year 2.

Promoted
Listen to the latest songs, only on JioSaavn.com
"We are a filmmaking company, and we will strive to tell stories with those who fit our vision the best. Casting newcomers is not a deliberate move but a natural process. Sara is a beautiful bundle of energy. The new talent we bring in today will be the future of the industry," Abhishek said about Sara.

Kedarnath is expected to hit the screens in June 2018.