"Saturdays Should Be Spent In The Sun," So Amyra Dastur Shared This Maldives Throwback

The picture is a throwback moment from her Maldives trip 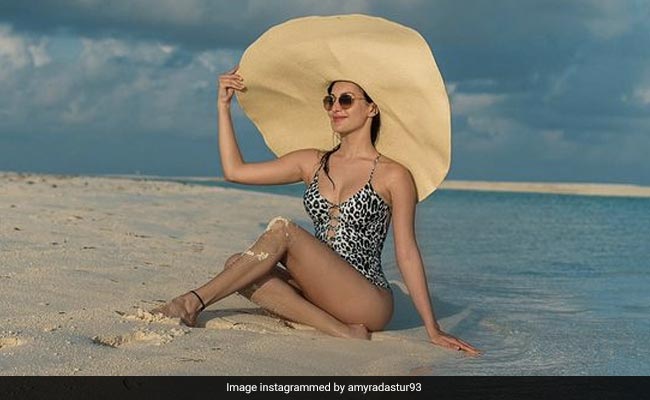 And, our weekend is made. Thank you, Amyra Dastur. The actress has shared a note on how to spend Saturdays. Just sleeping? No. As per Amyra, the first day of the weekend should be spent on a beach. “Saturdays should be spent in the Sun, on the sand and by the sea,” said her caption. Can we call it a perfect thought? Well, it doesn't end here. Along with the note, the actress has picked a throwback photo from her Maldives diaries. She is sitting on a beach dressed in a one-piece swimsuit. And, oh boy. She looks stunning. That jumbo beach hat has amplified her look. What do you think?

Amyra Dastur has declared herself as a “water baby” in one of the hashtags. Take a look at the sunkissed frame here:

Amyra Dastur paid a visit to the island nation in the month of October. Her pictures from the trip are enough to prove the amount of fun she had. Here is a snapshot of her “pool breakfast”. The actress is striking a pose with the elaborate meal on a floating platter amidst the breathtaking view. Amyra, you nailed it. Well, you will agree after looking at her caption, “Because breakfast in bed is so last season.” Goals.

Here, Amyra Dastur is giving us “mermaid vibes”. She is sitting on a window, stationed in the middle of the sea. The actress also shared an interesting note. Read it, “The sea, once it casts its spell, holds one in its net of wonder forever.”

Now, take a look at Amyra Dastur's underwater adventure. In the caption, the actress wrote, “Was trying to find Nemo, and I met Sharky.”