Only If Our Sundays Looked Like Amyra Dastur's Goa Pic 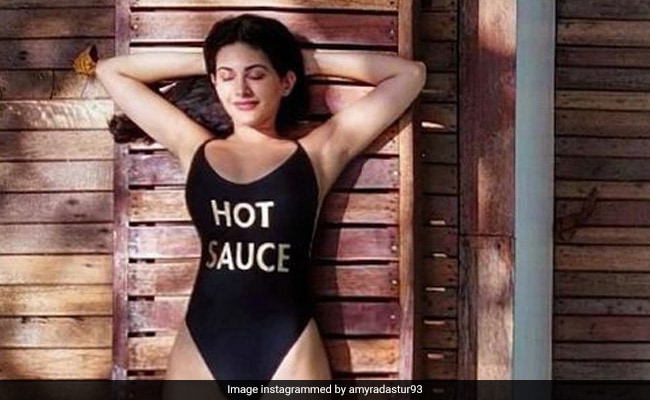 Lately, Amyra Dastur has been in the "getaway" mode and her recent social media posts say it all. Amyra's latest Instagram post is a new addition to her getaway diaries. On Sunday, the Koi Jaane Na actress posted a throwback picture from her Goa vacation on the platform. In the picture, Amyra can be seen chilling on a wooden bench near the swimming pool inside a villa. She looks stunning in a black swimsuit. In her caption, the actress used hashtags such as #sundayvibes, #weekendgetaway #casawaters #sundayfunday #solitude #grateful."

Water baby Amyra is majorly missing Goa. Recently, she posted another glimpse of her holiday on the platform. In the picture, the actress can be seen showing off her curves in an orange swimsuit. She is posing in the swimming pool. We couldn't ignore an evil-eye tattoo on her neck, you shouldn't miss it too. She wrote, "Earth, my body. Air, my breath. Fire, my will. Water, my blood," and added hashtags such as #goadiaries #casawaters #majormissing #weekendgetaway #waterbaby #naturechild.

Take a look at one more picture from her Goa vacation here:

In terms of work, Amyra Dastur made her Bollywood debut alongside Prateik Babbar in the 2013 film Issaq. Amyra has also worked in films such as Mr X, Kaalakaandi, Rajma Chawal, Judgementall Hai Kya, Made in China among many others.