Amitabh Bachchan has shared a photo explaining his footwear choice in light of the fractured toe. 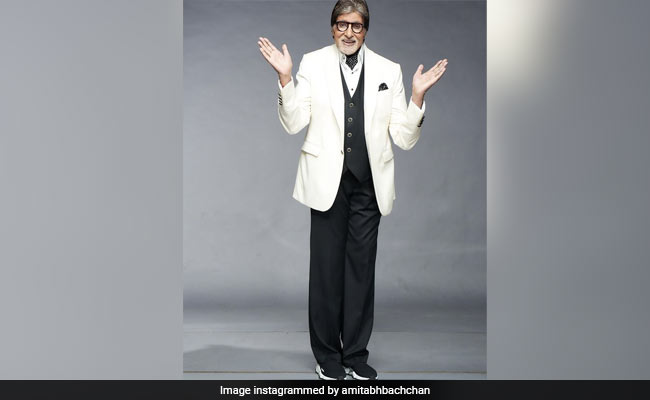 Amitabh Bachchan is one of the biggest superstars India has ever seen and for good reason. From his movies and television shows to his fashion choices, Big B has been an icon whose appeal has always transcended generations. The actor can also give several millennial stars a run for their money when it comes to social media presence. Sample this: Amitabh Bachchan, who is nursing a fractured toe, has shared a post on social media about his footwear choice in light of the injury. With this, he added a caption that is infused with his trademark humour and command over the English language. In the image, the legend is dressed in a three-piece suit with a “soft toed” shoe.

Explaining the reason behind ditching the formal shoes, Amitabh Bachchan wrote, “ When the traditional black patent leather shoe gets replaced or is fractured by the soft toed wear; because that is the only entry that a fractured toe can conceive.”

Amitabh Bachchan also acknowledged the longwinded sentence and usage of words and joked, “PARDON the effusive vocabulary... it's the early after the late before.” An apt caption by the legend, isn't it? After all, who can forget the iconic dialogue from Amar Akbar Anthony where Big B as Anthony Gonsalves rattles off a paragraph of gibberish with the eloquence of a seasoned orator.

Amitabh Bachchan even referred to the shoe in a blog post shared on Tuesday. An excerpt from the blog reads, “ And do pardon the shoes .. the toe be not in any improved form to enter the hallows of a regular leather shoe with the formed toe .. these are soft at the front end and give space for the toe - the fractured toe - to find a comfortable resting place and allow me the liberty of a restricted walk.

Earlier too, in a blog post, Amitabh Bachchan spoke about his injury. An excerpt reads, “And the camouflage shoes for the fractured toe .. socks like wearing but indeed a shoe .. soft protection for the toe that has been damaged and broken .. but still the joi de vivre ... and more .. a rewarding journey to the end of times whatever they be...”

Sharing a picture of his customised footwear from the sets of Kaun Banega Crorepati, Big B wrote, “Suit wahi hai… bas boot badal diye (The suit is the same, just the boot has been changed).”

Reacting to the image, Ranveer Singh dropped a crown emoticon in the comment section.

In addition to KBC, Amitabh Bachchan has a list of movies lined up. He will be seen in Ayan Mukerji's Brahmastra with Alia Bhatt and Ranbir Kapoor. In addition to this, he will feature in the sports drama Jhund, Vikas Bahl's Goodbye, as well as the Hindi remake of the Hollywood film The Intern with Deepika Padukone.