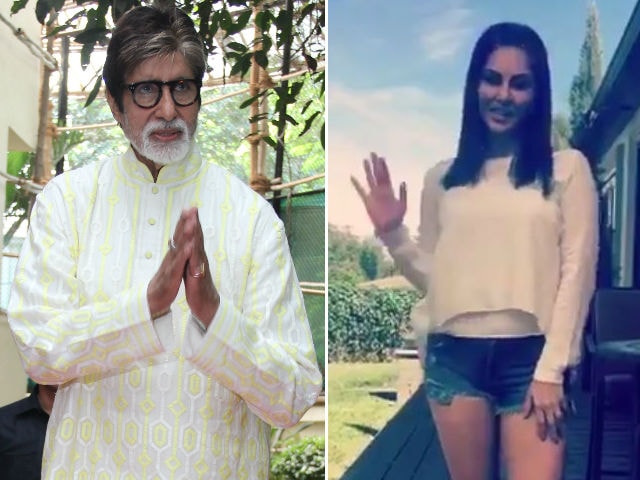 Amitabh Bachchan (L) in Mumbai. Sunny Leone (R) in a still from the video she posted on Twitter.

New Delhi: Bollywood actress Sunny Leone rapped for actor Amitabh Bachchan to wish him on his birthday. Sunny, who is currently in Los Angeles, shared a snippet in which she's dancing and singing in her backyard:

many many happy returns of d day @SrBachchan@TataSky#ThakurClan#RapforABpic.twitter.com/pK1sPapz11

The rap is a spin off from Mr Bachchan's Yo Se, Yo Se rap for a recent advertisement.

Dear @SrBachchan, wishing you a very happy birthday. Your versatility & humility has many admirers. Praying for your long & healthy life.

His Shamitabh co-star Dhanush and his wife Aishwaryaa tweeted:

@SrBachchan many many happy returns of the day sir :)

He will Out-cool, Outrun and Outlast us ALL!!!!! Happy happy birthday to the Institution that is @SrBachchan.. Thank you for being YOU

Wishing the legendary superstar @SrBachchan sir a very Happy Birthday You've been a true inspiration to me and many pic.twitter.com/zFI6nRDefe

Promoted
Listen to the latest songs, only on JioSaavn.com
His latest film Pink was also critically acclaimed.

Mr Bachchan received the Padma Vibhushan, the country's highest civilian honour in 2015, and Knight of the Legion of Honour by France in 2007 for his exceptional career in the world of cinema.