"My first drunk scene in the film, much before the mirror scene of Amar Akbar Anthony, Satte Pe Satta, Hum or Shakti," wrote Mr Bachchan 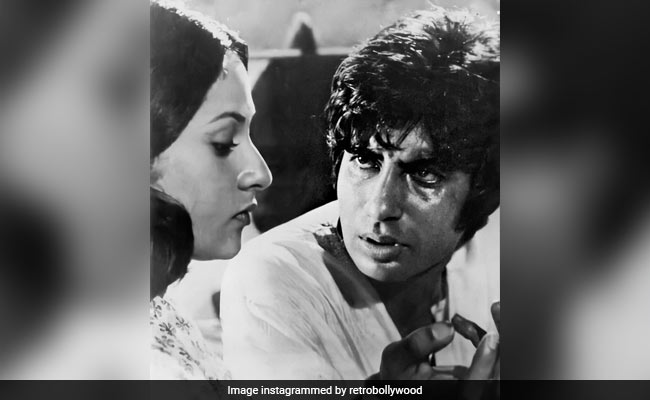 Amitabh and Jaya Bachchan in a still from Mili. (Image courtesy: retrobollywood )

Amitabh Bachchan, on Monday, revealed that he shot his "first drunk scene" for the 1975 film Mili. Mr Bachchan co-starred with wife Jaya in the film, which still rules the heart of many for its evergreen songs and Amitabh and Jaya Bachchan's chemistry. In his latest tweet, Big B shared artwork of the film's poster featuring him and his wife and wrote that he shot his "first drunk scene" in Mili, long before his drunk scenes from his blockbusters such as Amar Akbar Anthony, Hum, Satte Pe Satta and Shakti became iconic and popular among his fans. He wrote: "Mili... the film... Jaya and me... an artwork of such beauty... my first drunk scene in the film, much before the mirror scene of Amar Akbar Anthony, Satte Pe Satta, Hum or Shakti."

Mili, directed by Hrishikesh Mukherjee and written by Bimal Dutta and Mohini N Sippy, was among Amitabh and Jaya Bachchan's first few films after their wedding in 1973. In the film, Jaya plays the role of a cheerful and lively girl named Mili, who suffers from an incurable disease. However, it doesn't affect her zest for life. Amitabh Bachchan plays her neighbour Shekhar, a depressed man who prefers to drown his sorrows in alcohol. Mili's ways of living her life make Shekhar fall in love with her but when he gets to know of her disease, he tries to end the relationship with her to avoid grief. However, he later marries her and takes her to Switzerland for treatment.

The album of Mili has several iconic songs such as Aaye Tum Yaad Mujhe, sung by Kishore Kumar and Maine Kaha Phoolon Se, crooned by Lata Mangeshkar. The songs of the film were composed by the renowned music director SD Burman in association with his son, veteran music composer RD Burman. Mili remains SD Burman's last project. Another track from the film - Badi Sooni Sooni Hai - emerged as a super hit in the 70s and the 80s.