Amitabh Bachchan On Surviving Thugs Of Hindostan Action: Not My Age To Do All This

"It is not my age to do all this but our director asked us to do so I did it," said Amitabh Bachchan 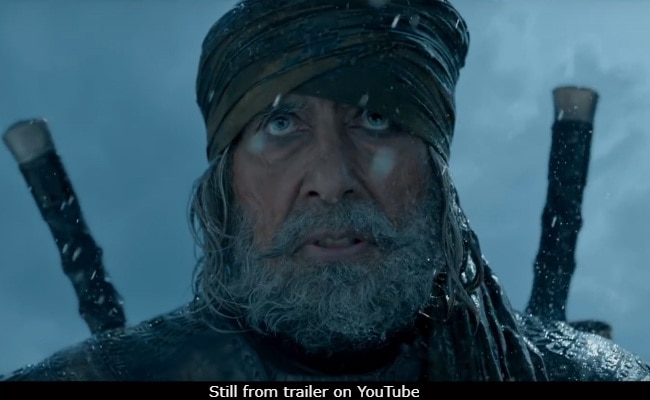 A still from Thugs Of Hindostan trailer (courtesy YouTube)

On the trailer day of Thugs Of Hindostan, Amitabh Bachchan revealed that he suffered massive injuries while filming intense action sequences for Thugs Of Hindostan, reported news agency PTI. Big B, who was speaking at the trailer launch of the film in Mumbai on Thursday, said he has consulted numerous doctors for diagnosis and treatment but his condition barely appears to improve: "It is not my age to do all this but our director asked us to do so I did it. There is no part of the body that has not been broken and there is no doctor that I haven't met. There is not much improvement," PTI quoted him as saying.

Earlier this year, Amitabh Bachchan posted on his blog that he was under medical care with doctors "fiddling around with his body". Later, his Thugs Of Hindostan co-star Aamir Khan had confirmed that the 75-year-old megastar was recuperating from massive back and shoulder pain. Ahead of that, Jaya Bachchan had told IANS that the heavy costumes of Thugs Of Hindostan caused him pain: "Amitji is fine. He has pain in the back and neck. The costumes are very heavy, so, there's some pain. Otherwise, he is fine," IANS quoted Mrs Bachchan as saying.

Big B, who had not spoken about the injuries from Thugs Of Hindostan sets before, reiterated what Jaya Bachchan had said earlier: "Had they made me wear normal clothes, it would have been easier but I was made to wear armour. They made me wear leather clothes and it was so heavy, it was about 30-40 kg, then they gave me a sword, turban and long hair. It took three hours for me to get ready. The most dangerous part was all the action sequences were shot in rains due to which the clothes got all the more heavy."

Amitabh Bachchan features as the feisty commander of the sea Khudabaksh, also called Azad, in the movie. The trailer reveals Big B sports heavy armour as part of his character and features in intriguing action sequences, in which his signature weapon appears to be a sword.

Big B, who often posts on his official blog about returning home from work at late hours and joining film sets in the wee hours of the day, added this at the press conference: "After technology has become advanced, people rather look more into detailing. We have to work harder. Don't think because of technology our work has become easy. To some extent visually, it has become a lot more presentable. But in the old days, we chose large locations, shot at the location and everything was done immediately."

In Thugs Of Hindostan, Aamir Khan plays a conman named Firangi Mullah while Fatima Sana Shaikh features as an ace archer. Katrina Kaif has been cast as dancer Surraiyya. The trailer reveals that Thugs Of Hindostan is set in 1795, by when the East India Company had begun to rule India. Directed by Vijay Krishna Acharya, the film is a fictional retelling of the thugs' battle against the oppressors to free India from the shackles of the East India Company. The Jack Sparrow-ish Firangi infiltrates Khudabaksh's army in order to rat out his war plans to the East India Company and the trailer ends with a cliffhanging moment when the two thugs confront each other.