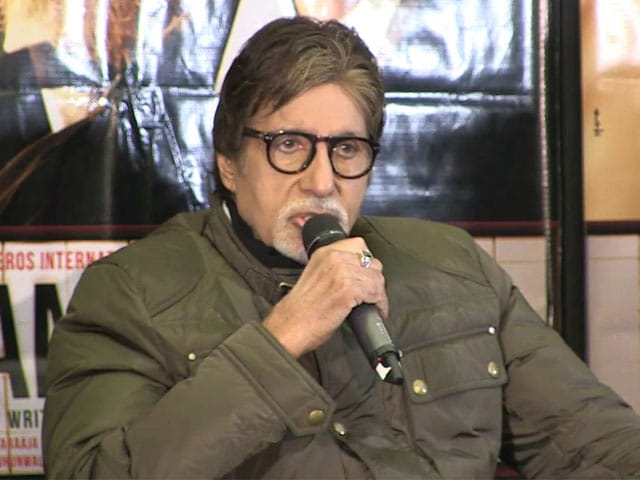 Big B was promoting Shamitabh

Can someone's voice play a leading role in a movie? Amitabh Bachchan's rich baritone has achieved just that. The Emperor of Bollywood promoted his upcoming film Shamitabh in London and took the Queen's country by storm.

Big B who was accompanied by his Shamitabh co-stars Dhanush and Akshara Haasan, recited dialogues from the film and also spoke about his singing ambition (or the lack of it) - In Shamitabh, Dhanush plays a speech-challenged actor who rises to stardom with the help of Mr Bachchan who lip-syncs for him.

Mr Bachchan also spoke about producing the film, its complex voicing and playback challenges. He said, "I recorded the entire script inside a dubbing theatre all by myself and Balki telling me how his vision was about how the screen play would go. And then we filmed it and played back what was recorded so actors performed according to the recording. And then I went and re-dubbed the entire film again because his (Dhanush) facial expressions are going to be different to my voice."


Big B, who's voice was also in the news for his soulful rendition of the National Anthem, was asked if he would sing more. The actor replied in characteristic tongue-in-cheek fashion, "My voice is terrible man. I'm not a singer but there are wonderful instruments these days which are called auto-tune and you sing in whatever rubbish manner and you feed it into this beautiful machine and it makes you sound like Frank Sinatra."

Dhanush, who also seemed to be on the same wavelength as Big B, added a dash of humour to the proceedings. When he was asked to sing Kolaveri Di, he replied, "Actually Balki told me you dare not sing that song on my film's promotion."

Thoughts quickly turned to Mamata Banerjee's comment about Mr Bachchan's Padma award and that he should actually be given the Bharat Ratna. The modest star said, "Mamata Di is being far too generous and a little too liberal in her thoughts. I wanted to do an audition test and work in the movie don't deserve the Bharat Ratna. I'm very grateful to the givernment oif india for giving me this recognition. I always felt that I don't deserve all this."

Promoted
Listen to the latest songs, only on JioSaavn.com
He also revealed that he was rejected for an audition test. "I went for an audition test with All India Radio, for being a news reader and commentator and tried in both the languages English and Hindi and was rejected there. But that's fine. Maybe my voice was not suitable. There were some very eminent commentators at that time."

And with so much talk about his voice, Big B finally went down memory lane with a Bachchan classic Kabhi Kabhie, reciting lines from the evergreen film.