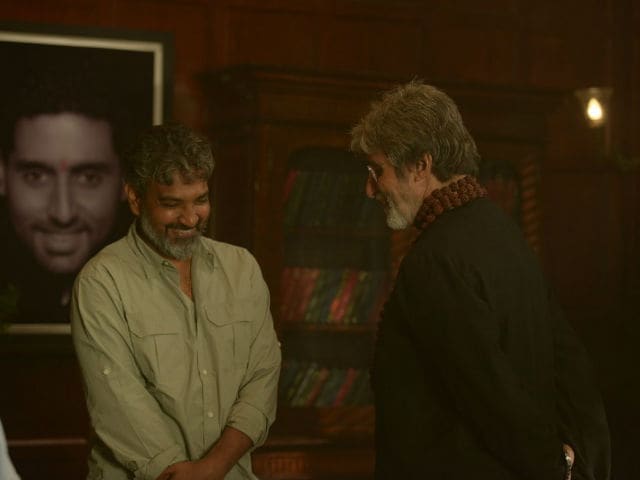 New Delhi: Actor Amitabh Bachchan was busy filming Ram Gopal Varma's Sarkar 3 when Baahubali director SS Rajamouli dropped in. The 74-year-old actor tweeted pictures of his visit, but did not disclose the contents of their meeting. Mr Bachchan praised Rajamouli and said:

T 2424 - The genius director Rajamouli of that colossal film 'Bahubali' on set of SARKAR 3 .. a simple humble man !! pic.twitter.com/c6K8vPQpC1

We are super thrilled to see them in single frame. Possibilities are endless, but currently we are forced to believe that this was just a casual visit.

Mr Bachchan is shooting for the third film in Sarkar series, which is loosely based on Hollywood's Godfather. In the film Big B features as Subhash 'Sarkar' Nagare. In the third film, RGV has revamped almost the entire cast which includes Manoj Bajpayee, Ronit Roy, Amit Sadh, Jackie Shroff, Bharat Dhabolkar, Rohini Hattangadi.

Of the film's preliminary reception Mr Bachchan wrote on his blog: "I saw the first scene of Sarkar 3 edited by RGV of Ram Gopal Varma and shared it with some. A stunned silence preceded the gushing praise that followed. From common house wives to seasoned head of work departments, 'If this is the first scene,' they said, 'wonder what will happen after this' and how will the strength of the first scene remain in such prominence compared to what shall follow later."

Promoted
Listen to the latest songs, only on JioSaavn.com
Meanwhile, director Rajamouli has a deadline to meet. The second and final part of his epic drama Baahubali will hit the screens on April 28. Rajamouli along with the film's principle cast - Prabhas, Rana Daggubati, Anushka Shetty and Tamannaah Bhatia - is busy completing the film.