Pooja Bhatt wrote, "People from various walks of life came together to ensure we finished what we began with the same degree of enthusiasm" 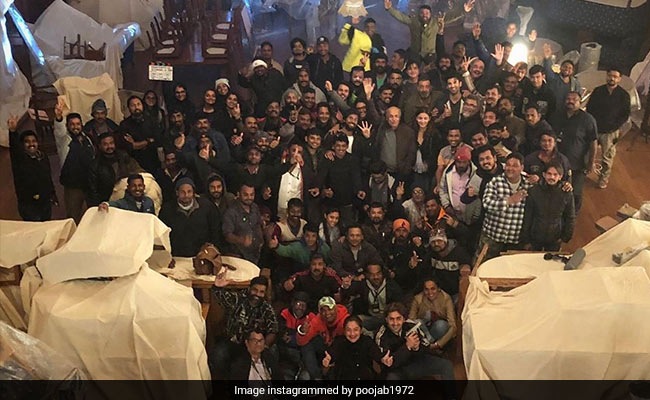 Pooja Bhatt shared this picture of the cast and crew of Sadak 2. (Image courtesy: poojab1972)

Actress Pooja Bhatt shared an appreciation post for the entire cast and crew of Sadak 2, two days before the film releases on Disney + Hotstar. She shared a picture from what appears to be the last day of the shoot and said that Sadak 2 has four minutes of end credits - incorporating names of the "staggering amount of people" who helped complete the project. In the picture, director Mahesh Bhatt and actors Alia Bhatt and Sanjay Dutt are surrounded by a sea of people while Pooja Bhatt found a spot in the front of the group. Last week, the cast and crew returned to the sets one more time to complete filming amid the coronavirus outbreak. She captioned the post: "While people focus on the names above the title and opening credits, they don't consider the army behind the scenes that make it all happen. The unsung champs who ensure the actors and others shine. Sadak 2 has four minutes of end credits."

"Staggering amount of people from various walks of life came together to ensure we finished what we began with the same degree of enthusiasm - that too during a pandemic. So, three cheers to the crew! There would be no films, no magic, no start sound, no cut, no moving-on without you. My deepest gratitude and salutations to each of you," she added. You can read Pooja Bhatt's post here.

Sadak 2 is the sequel to Mahesh Bhatt's 1991 film Sadak and it takes forward the story of Ravi (Sanjay Dutt), who now owns a cab company used for transporting tourists. He joins Alia Bhatt's mission to destroy a godman, who was responsible for the death of someone close to her. Pooja Bhatt reprises the role of Pooja and she only appears in flashback sequences.