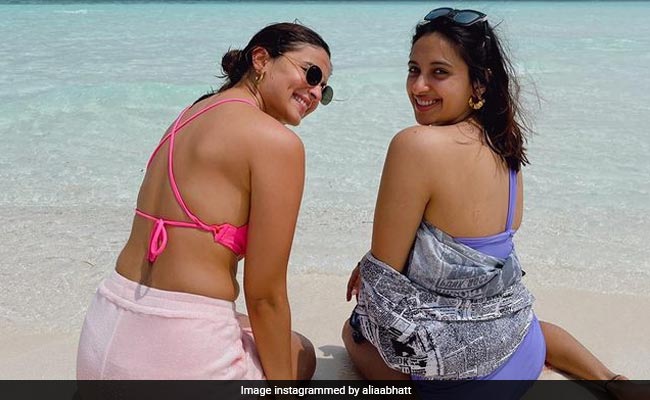 Alia Bhatt wouldn't have missed wishing her childhood friend Akansha Ranjan Kapoor for the world. On her BFF's birthday, Alia Bhatt shared a million-dollar throwback picture of herself along with the birthday girl. The picture happens to be from Alia and Akansha's Maldives vacation. They went on a holiday to the island nation in February this year and were joined by Alia's sister and author Shaheen Bhatt. Posting a happy picture with the birthday girl, Alia Bhatt captioned it: "Happy birthday my universe."

Alia Bhatt returned early from the vacation after her boyfriend Ranbir Kapoor's uncle Rajiv Kapoor died in February. Here are some throwbacks from their vacation:

Akansha Ranjan Kapoor  made her acting debut with Netflix's Guilty last year, which also starred Kiara Advani, Gurfateh Singh Pirzada and Taher Shabbir in pivotal roles. Directed by Ruchi Narain, the film was produced by Karan Johar's Dharma Productions. Alia Bhatt cheered for her bestie at the film's screening last year. Akansha recently starred in Netflix's Ray. She was a part of Spotlight, alongside Harsh Varrdhan Kapoor and Radhika Madan.

Alia Bhatt has a busy schedule this year, with several film releases lined up. Her upcoming projects include Ayan Mukerji's fantasy trilogy Brahmastra, co-starring boyfriend Ranbir Kapoor and veteran Amitabh Bachchan, and SS Rajamouli's RRR with Ram Charan, Jr NTR and Ajay Devgn. She will also be seen in Gangubai Kathiawadi, which has been directed by Sanjay Leela Bhansali.

This Is How Kareena Kapoor Feels After 108 Surya Namaskars