What better way to beat the summer heat than with some ice cream? Priyanka Chopra knows best 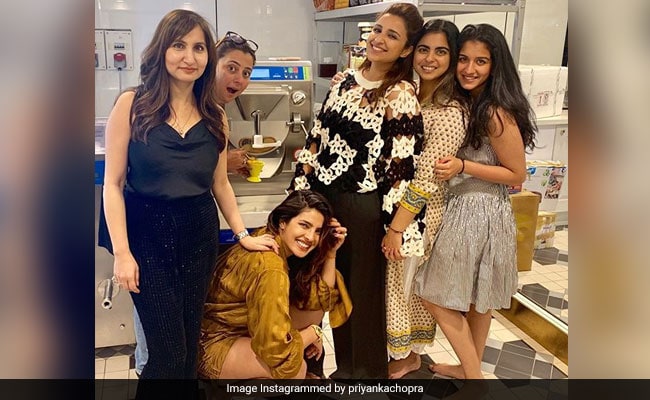 Priyanka Chopra, who is currently in Mumbai, is having the time of her life! What better way to beat the summer heat than with some ice cream and the 36-year-old actress did just that on Sunday as Isha Ambani hosted an ice cream-making session at her home. "Making home-made ice cream! Thank you to the hostess with the mostest. Isha Ambani, love you! Your home is amazing! I wish you love and laughter always. Here's to many more girls nights!" Priyanka captioned a photo also featuring her cousin Parineeti Chopra and along with Srishti Behl Arya, Tamanna Dutta and Radhika Merchant. We could have also spotted Alia Bhatt in the picture but looks like she missed the masti-shasti by just minutes: "Alia Bhatt, you missed the madness by minutes! Love all you ladies," Priyanka added in her post.

Making home made ice cream! Thank you to the hostess with the mostest. @_iiishmagish love u! Your home is amazing! I wish you love and laughter always. Here's to many more girls nights! @aliaabhatt u Missed the madness by minutes! Love all u ladies!

We made icecream at home! (And thats probably the only thing we can confess to doing on a public platform because what happens at girls night, stays at girls night!) Thankss @_iiishmagish your home is BEAUTIFUL!! @priyankachopra @radhikamerchant @srishtibehlarya @tam2cul

Isha Ambani and Anand Piramal had the grandest wedding in December last year, after which they moved in to their new home - a 50,000 square-foot mansion, Gulita. Priyanka Chopra and Nick Jonas, who were just few days into their marriage in December, attended Isha Ambani's big fat wedding festivities together. Isha Ambani has also been part of Priyanka's wedding entourage. Isha Ambani partied with Priyanka Chopra, Sophie Turner, Parineeti Chopra and others on the actress' bachelorette trip to Amsterdam.

Meanwhile, when in Mumbai, Priyanka Chopra is catching up with her family over major fam-jams.

Priyanka Chopra is said to be in India for the wedding festivities of her brother Siddharth Chopra, who got engaged to Ishita Kumar earlier this year.