Actress Alia Bhatt, who is simultaneously shooting for her upcoming films Kalank and Brahmastra, took a break from her busy schedule 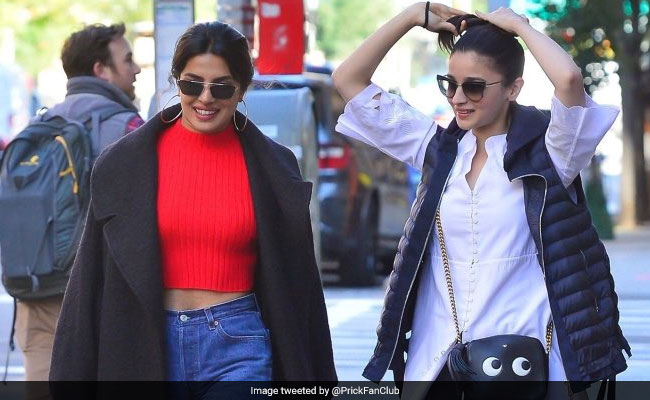 Actress Alia Bhatt took some time off her busy schedule and arrived in New York where the actress was spotted chilling with Priyanka Chopra, and earlier, with rumoured boyfriend Ranbir Kapoor. Fan clubs have shared videos and photos of Priyanka and Alia hanging out in the city. In a video clip that is now viral, the duo can be seen exiting a building and making their way to a car. After she arrived in New York, Alia also shared a photo of herself on her Instagram timeline and captioned it: "The Big Apple". Alia Bhatt's rumoured boyfriend Ranbir Kapoor is also in New York with his parents Rishi Kapoor and Neetu Kapoor. Rishi Kapoor is undergoing medical treatment for an undisclosed illness in the US.

Priyanka, who arrived in New York last week, caught up with Rishi Kapoor and his wife Neetu Kapoor. Sonali Bendre and her filmmaker husband Goldie Behl also joined the get-together. Sonali Bendre is undergoing treatment for cancer in the US.

Ranbir and Alia, who often trend for their rumoured romance, made headlines once again after their pictures of shopping together in New York hit the internet. Ranbir and Alia's pictures from their recent outing in the city went crazy viral. Fan clubs curated photos of the rumoured couple, where they can be seen holding shopping bags and posing.

#RanbirKapoor and @aliaabhatt spotted on the street of NYC.

Last month, Rishi Kapoor announced on Twitter that he is leaving for the US for medical treatment. "Hello all! I am taking a short leave of absence from work to go to America for some medical treatment. I urge my well-wishers not to worry or unnecessarily speculate. It's been 45 years "plus" of wear and tear at the movies. With your love and good wishes, I will be back soon!" read Rishi Kapoor's tweet. Rishi Kapoor and his family (except Riddhima) missed the funeral of Krishna Raj Kapoor, who died a couple of days after they left for USA. Alia Bhatt was spotted attending the funeral with Brahmastra director and close friend Ayan Mukerji and Karan Johar.

Alia Bhatt and Ranbir Kapoor are also co-stars of Brahmastra. For the first time Ranbir and Alia will co-star in a film together, which also stars Amitabh Bachchan, Mouni Roy and Dimple Kapadia. Ranbir and Alia completed their Bulgaria schedule recently. The first part of the film is expected to release next year.