"Sooryavanshi will be back for you just when the time is right," read an excerpt of the statement issued by the makers 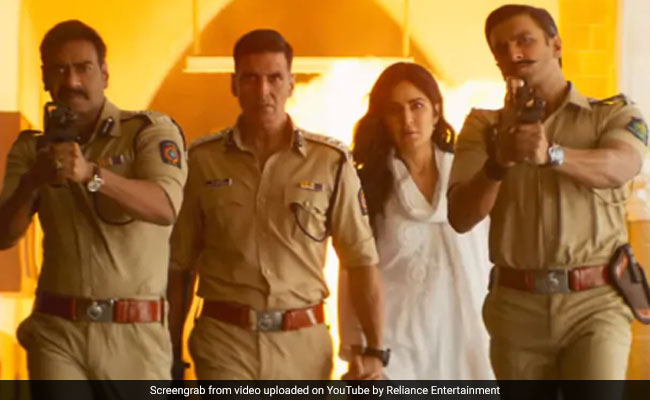 Sooryavanshi: A still from the film. (Image courtesy: YouTube)

The makers of Sooryavanshi postponed the film's release amidst the Coronavirus scare. They issued a statement on social media on Thursday evening and informed their fans that they have delayed the film's release "keeping in mind the health and safety" of their audience. The makers have not announced the new release date of Sooryavanshi, which was earlier slated to open in theatres on March 27. The statement, shared by director Rohit Shetty and lead actors such as Akshay Kumar and Katrina Kaif, read: "Sooryavanshi is an experience that we have created for you with over a year of dedication and hard work, and the response we received for its trailer was nothing less than electrifying and made it clear that this film truly belongs to its audience."

"We have been as excited as you are to present the film to you and your family but due to recent outburst of the COVID-19 (Coronavirus), we, the makers, have decided to postpone the release of your film Sooryavanshi, keeping in mind the health and safety of our beloved audience. And therefore, Sooryavanshi will be back for you just when the time is right. After all, safety comes first. Until then, keep the excitement alive, take good care of yourself and stay strong," read the full statement.

Sooryavanshi is the fourth film in Rohit Shetty's cop universe. Other than Akshay Kumar and Katrina Kaif, the film will also feature Ranveer Singh (who played a police officer in the 2018 film Simmba) and Ajay Devgn (who starred in the cop series Singham). In the upcoming film, Akshay will play the lead role of Veer Suryavanshi, a character that was introduced as an Anti-Terrorist Squad (ATS) officer in a cameo role in Simmba.

Due to the Coronavirus scare, the Delhi government announced on Thursday that all cinema halls, schools and colleges will remain shut till March 31.

The virus, first detected in China's Wuhan, has infected over 1.29 lakh people in 100-plus countries around the world, claiming over 4,000 lives. In India, over 70 cases of Coronavirus have been detected so far.