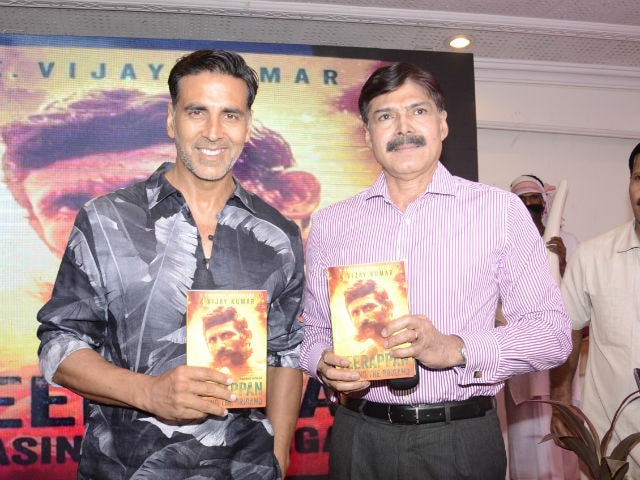 Akshay Kumar and Vijay Kumar at the launch of Veerappan: Chasing The Brigand in Mumbai

New Delhi: Actor Akshay Kumar considers Vijay Kumar, who led Operation Cocoon against brigand Veerappan, a "legend." The 49-year-old actor, who was present at the launch of Vijay Kumar's book, Veerappan: Chasing The Brigand in Mumbai, shared a post on Twitter, saying, "Honoured to be a part of the book launch of the man whom I consider a legend, @KVijayKumarIPS. Veerappan #ChasingTheBrigand - a must read. (sic.)" Vijay Kumar, ex-IPS officer, led the Special Task Force, which was instrumental in killing Verrappan. Akshay Kumar also said that he is keen on playing Vijay Kumar, reports news agency PTI. He said, "I would love to play him as the whole planning, and how the operation has to be conducted, was done by him."

For Akshay Kumar, Vijay Kumar is the real hero, reports PTI. "I am so happy to be here. The reel hero gets an opportunity to be here with the real hero," he said. Veerappan: Chasing The Brigand is about the life of the brigand - from his birth to the several attempts in killing him.

Honoured to be a part of the book launch of the man whom I consider a legend, @KVijayKumarIPS Veerappan #ChasingTheBrigand - a must read! pic.twitter.com/1CMlAN4ItE

Akshay Kumar recently launched BharatKeVeer, an online platform where families of slain soldiers can be helped directly with monetary contributions. He launched the website with Union Minister Rajnath Singh. "This website has been made exactly in two and a half months. About three months, this idea came in my mind, while watching a documentary film on terrorists, which showed how terror leaders financially support the families of the terrorist who carry out terror acts." Akshay said at the inauguration, reports PTI.

A Day I Found Hard To Hold Back My Tears...Support the families of our Bravehearts #BharatKeVeer Now LIVE --> https://t.co/wCPFZOYV7gpic.twitter.com/8wKGcaRYdD

Such an Honour to Garland the sacred soil of the Sardar Post on #ValourDay. Launching my dream, #BharatKeVeer as we speak!! Jai Hind pic.twitter.com/JbJUoNbq5i

Promoted
Listen to the latest songs, only on JioSaavn.com
On the work front, the actor is busy with Toilet Ek Prem Katha where he will be seen along with Dum Laga Ke Haisha actress Bhumi Pednekar. He is also working on Padman, his wife Twinkle Khanna's first production venture. The film is being directed by R Balki. He won the National Film Award for Best Actor for Rustom this month.