A video of what appears to be the stadium for Maidaan, with damaged set constructions, is viral on the Internet 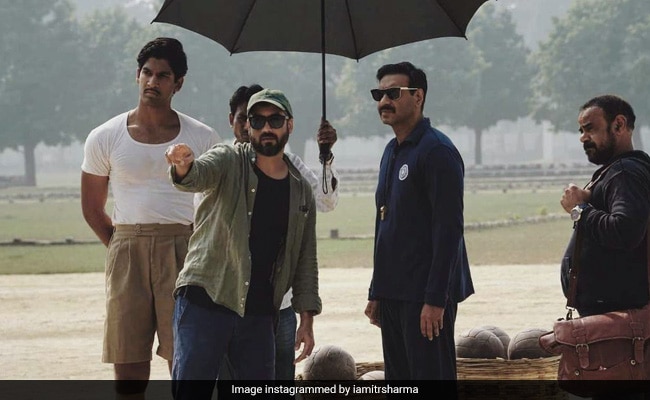 Looks like there's been another roadblock for Ajay Devgn's upcoming movie Maidaan. Cyclone Tauktae, which passed through Mumbai on Monday, has reportedly damaged the set of Maidaan erected at a stadium in the outskirts of Mumbai. Citing a source close to the production, Times Of India reported that the stadium, which housed most of the film's set, was destroyed as the cyclone passed through Mumbai. There were some 40 people present at the stadium but no casualty has been reported. "There were about 40 people on set when the cyclone hit the Maidaan set - the guards and the curators of the football ground which largely comprises the set. They tried their best to save as much as they could but their efforts proved almost totally futile," TOI quoted the source as saying.

A video of what appears to be the stadium for Maidaan, with damaged set constructions, is viral on the Internet.

Last year, the shooting of Maidaan was stalled when the nationwide lockdown was imposed to curb the pandemic. A huge set, sprawling over 16 acres of land in the same area, had to be dismantled as shooting schedules and film productions were halted last year. The makers of Maidaan were reportedly looking forward to resuming the film's schedule this year but Maharashtra is currently under lockdown-like restrictions till June 1.

The cyclonic storm is reported to have affected the sets of two more films - Sanjay Leela Bhansali's Gangubai Kathiawadi and Tiger 3, starring Salman Khan. A day after the cyclone, Amitabh Bachchan wrote in a blog post that his Mumbai office Janak was "flooded" and suffered damages. Mr Bachchan also wrote about helping his staff members with clothes from his own wardrobe.

Directed by Amit Ravindrenath Sharma and produced by Boney Kapoor, Maidaan is a biographical sports drama inspired Syed Abdul Rahim, who was regarded as the architect of Indian football. Ajay Devgn plays the protagonist in the movie while actress Priyamani has been cast as the female lead.