After Cyclone Tauktae, The Scene Outside Ranbir Kapoor's Under Construction Home

In the past few months, Ranbir Kapoor and his girlfriend Alia Bhatt have often dropped by the construction site to get a status update on the renovation work 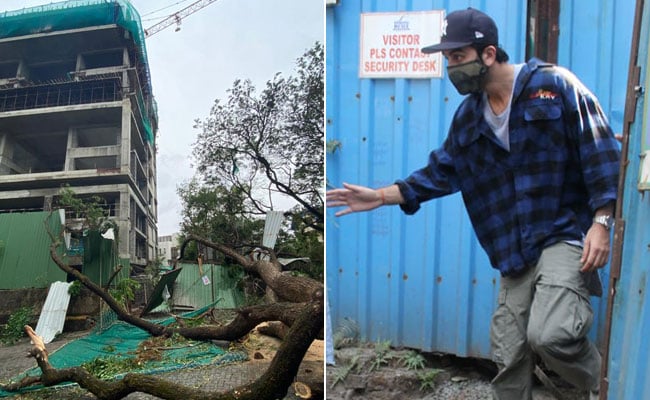 Ranbir Kapoor's house is under construction

On Monday, Cyclone Tauktae passed through Mumbai, triggering strong winds with the highest-ever speed of 114 kilometres per hour in Maximum City. The cyclonic storm also brought the highest ever rainfall in Mumbai in May, leading to massive water logging across the city and road blocks because of fallen trees. The lane outside Ranbir Kapoor's new home in Bandra's Pali Hill, which is currently being renovated, was blocked by a huge tree, which appears to have fallen on the premises of the construction site. The make-shift fence around the construction site also appears to have been damaged by the uprooted tree. In the past few months, Ranbir Kapoor and his girlfriend Alia Bhatt have often dropped by the construction site to get a status update on the renovation work. They were often joined by Ranbir's mother Neetu Kapoor.

Here are some photos from outside the under construction Kapoor bungalow after Cyclone Tauktae wreaked havoc in Mumbai.

In another part of Mumbai, the lane leading to actors Hrithik Roshan and Akshay Kumar's Juhu bungalows was blocked by fallen trees.

Meanwhile in Juhu, the lane outside TV czarina Ekta Kapoor's home was also blocked by several trees which fell during the cyclone.

A day after the cyclone, Amitabh Bachchan wrote in a blog post that his Mumbai office Janak was "flooded" and suffered damages. Mr Bachchan also wrote about helping his staff members with clothes from his own wardrobe: "There is an eerie silence in the midst of the cyclone... the pounding and the lashing rains all day... trees fell, leakages all over, flooding in the vulnerable Janak Office... impromptu plastic cover sheets still in prep for the heavy monsoon rain, ripped apart... sheds and shelters for some staff blown away," read an excerpt from Amitabh Bachchan's blog.

Cyclone Tauktae made landfall in Gujarat at around 8.30 pm on Monday, packing winds with speeds of 155-165 kilometres per hour, gusting to 190 km/hour, after which the cyclone passed through Maharashtra. Flight operations at Mumbai's Chhatrapati Shivaji Maharaj International Airport was suspended from morning till 10 pm on Monday because of Cyclone Tauktae.