"Sharing screen with superstars Kajol and Ajay Devgn is an experience that I will always cherish," said child artiste Arush Nand 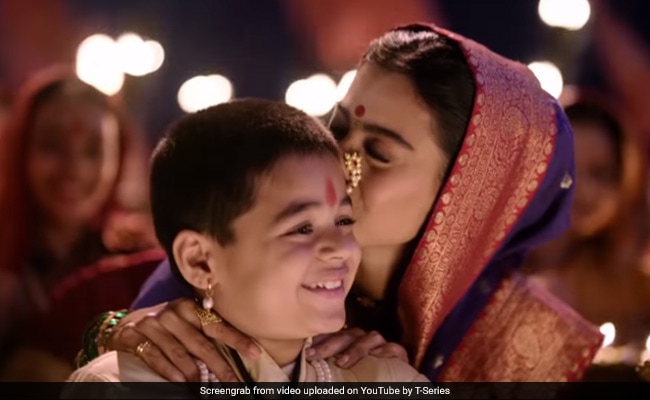 Kajol and Arush Nand in a still from Tanhaji (courtesy YouTube)

Child artiste Arush Nand, who plays the role of Ajay Devgn and Kajol's onscreen son in period piece Tanhaji: The Unsung Warrior, shared his experience of working with the stars in an interaction with news agency IANS: "Sharing screen with superstars Kajol and Ajay Devgn is an experience that I will always cherish," he said. Talking about how different Ajay Devgn and Kajol were on the film's sets during the shooting days, Arush Nand added: "On the set, Ajay sir was always quiet and Kajol ma'am was always chatty," reported IANS. Ajay Devgn features as Tanaji Malusare - the titular 'unsung warrior' who was Chhatrapati Shivaji's general - in the movie. Kajol has been cast as Tanaji's wife Savitribai Malusare.

Remembering an hilarious anecdote from when he was shooting the song Maay Bhavani with Kajol and Ajay, young Arush Nand told IANS: "I remember when we were doing a song sequence where Ajay sir had to lift me on his shoulder, Kajol ma'am asked me whether I have eaten or not because otherwise Ajay sir had to put an extra effort to put me on his shoulder! That lightened the mood quite a bit. I was surprised initially, but then Kajol ma'am burst into laughter."

Speaking to IANS earlier, Ajay Devgn revealed being on a film set with Kajol felt like being "at home": "I don't know what the feeling is, because I felt that we are at home and not on a film set. We behaved with each other in front of everybody the way we behave at home. So, I won't be able to differentiate."

Apart from Tanhaji: The Unsung Warrior, Arush Nand has featured in films such as Neerja, Phobia and Pari. Directed by Om Raut, Tanhaji is currently in its second week in theatres and has made a score of Rs 183 crore since its release on January 10.