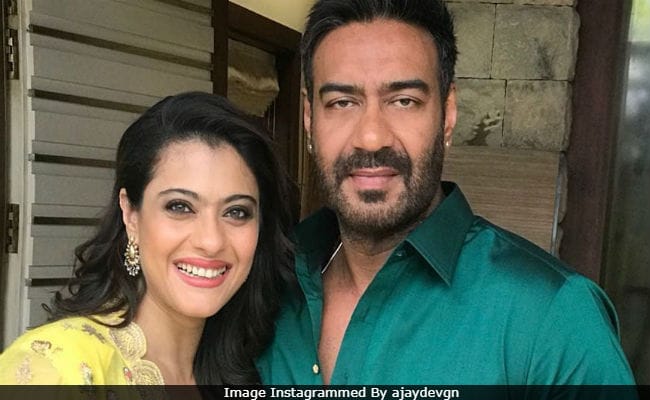 Actor Ajay Devgn, who generally refrains from posting pictures from his family album, shared an adorable post with wife Kajol, because of 'popular demand,' he claimed on Instagram. The couple's picture appears to be taken before they launched the trailer of Helicopter Eela, Kajol's upcoming film co-produced by Ajay Devgn. "By popular demand," Ajay Devgn captioned the picture, shared an hour ago. The 'popular demand' over here perhaps might be from Kajol, who celebrated her 44th birthday on Sunday (just guessing). "So cute" and "fabulous" are some of the comments on Ajay Devgn and Kajol's picture. Take a look.

The trailer of Helicopter Eela, also starring Riddhi Sen and Neha Dhupia, was Kajol's return gift for her fans. Helicopter Eela tracks the story of a single mother and his son and is said to be about 'reinventing parenting techniques.' Helicopter Eela releases on September 7.

We accidentally missed out @swanandkirkire's name as lyricist from Helicopter Eela trailer. Apologies, rectifying it.

Kajol and Ajay Devgn, who married in 1999, are parents to daughter Nysa, 15, and song Yug, 7. Nysa is completing her studies in Singapore while Yug stays in Mumbai with his parents. The family was in London till last week and returned to India just in time to launch Helicopter Eela trailer on Kajol's birthday.

Last seen in Raid, Total Dhamaal, Sons Of Sardaar, Taanaji: The Unsung Warrior are some of Ajay Devgn's upcoming films.