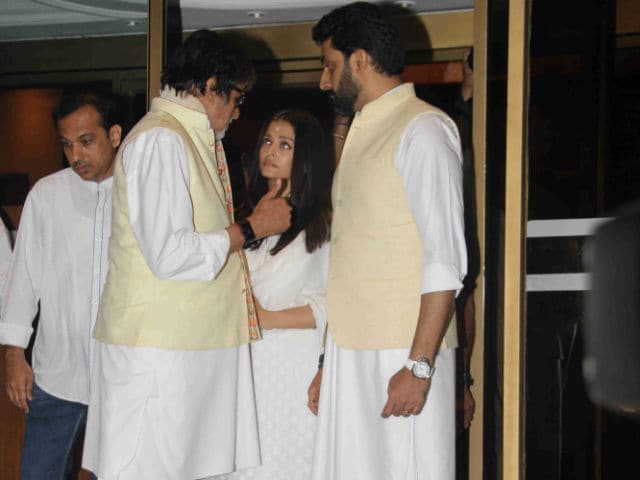 New Delhi: Actor Abhishek Bachchan thanked everyone for their prayers after the death of his wife Aishwarya Rai Bachchan's father, Krishnaraj Rai. Aishwarya is not on social media but both her husband and father-in-law Amitabh Bachchan have tweeted to those who sent their condolences. On Wednesday morning, 41-year-old Abhishek tweeted: "Thank you all for the prayers and wishes for Aishwarya's father." Krishnaraj Rai died on March 18 at Mumbai's Lilavati Hospital. He reportedly had a lymphoma and had been in hospital for a month. Mr Rai's funeral was held on Saturday night and a prayer meeting was organised on Tuesday. Several colleagues from the film industry condoled his death with the Bachchans and the Rais.

A few days ago, Amitabh Bachchan tweeted, thanking everyone for their wishes. "To them that express condolence on the passing of Aishwarya's father, my gratitude," he wrote.

On his official blog, Mr Bachchan wrote an emotional post on "Death.. the inevitable end." He posted, "That call you wait anxiously knowing that it will come, and come it does to end all other calls .. glimpses of reactions in the mind, of the lost one, of those that shall reflect on the lost one .. and suddenly then in the midst of sorrow and grief among the grieved and grieving .."

Promoted
Listen to the latest songs, only on JioSaavn.com
Abhishek Bachchan married Aishwarya Rai in April 2007. They have co-starred in films like Dhaai Akshar Prem Ke, Kuch Naa Kaho, Guru, Dhoom and Raavan. Abhishek and Aishwarya have a 5-year-old daughter named Aaradhya.

Krishnaraj and Vrinda Rai also have a son named Aditya.

R Madhavan On Directing Films In Future: "I Am A By Chance Director"