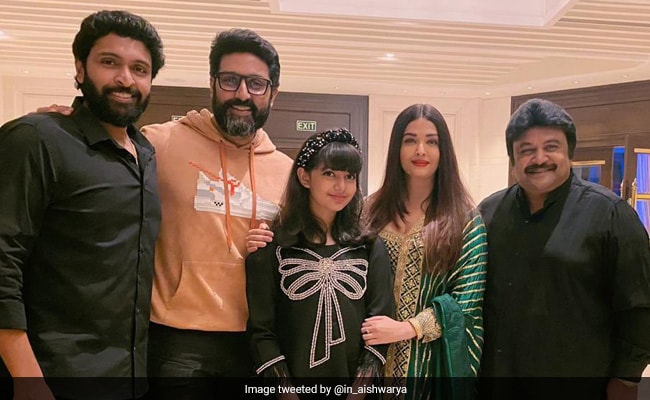 A picture from the success bash. (courtesy: in_aishwarya)

Aishwarya Rai Bachchan attended the success party of her film Ponniyin Selvan in Chennai over the weekend. The actress who played antagonist Nandini in the first part of Mani Ratnam's magnum opus, attended the bash along with her husband Abhishek Bachchan and daughter Aaradhya. Pictures from the party have been shared by several fan pages dedicated to the actress on social media and they are trending big time. In one of the pictures, Aishwarya Rai Bachchan, stunning in a green ensemble, can be seen happily posing with daughter Aaradhya and husband Abhishek.

See the photo from the success bash here:

Ponniyin Selvan, produced by Lyca Productions, was the first part of magnum opus Ponniyin Selvan. It released in theatres on September in five languages - Tamil, Hindi, Telugu, Malayalam and Kannada. The film clashed with Vikram Vedha, starring Hrithik Roshan and Saif Ali Khan at the box office. The film opened to good reviews from film critics and was equally adept at impressing the audience.

The period drama was based on Kalki Krishnamurthy's popular historical novel Ponniyin Selvan (The Son Of Ponni) and its cast included some of the biggest stars including Vikram, Trisha, Karthi, Jayam Ravi. It also starred Sobhita Dhulipala and Aishwarya Lekshmi.

Abhishek and Aishwarya, co-stars of Umrao Jaan, Guru, Kuch Naa Kaho and Raavan among others, got married on April 20, 2007. The star couple welcomed their daughter Aaradhya in 2011.