Aishwarya Rai Bachchan shared a picture of daughter Aaradhya, who is seen standing in front of a photo of Krishnaraj Rai 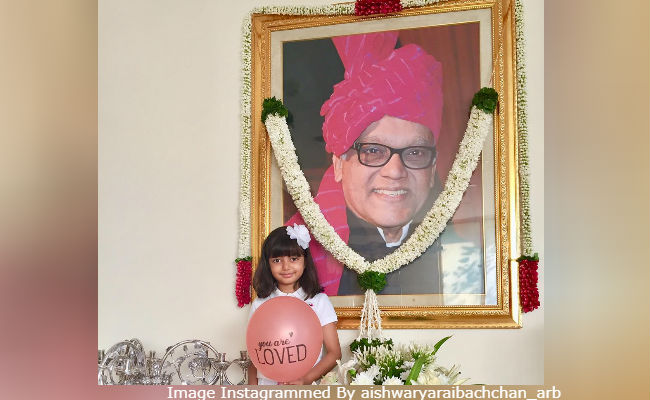 Actress Aishwarya Rai Bachchan shared a heartfelt post on Instagram on Tuesday morning to remember her late father Krishnaraj Rai on his birth anniversary. Mr Rai died last year. On her Instagram timeline, Aishwarya shared a picture of daughter Aaradhya, 7, who is seen standing in front of a photo of Krishnaraj Rai and wrote, "Love you eternally daddy-ajja. Pranam and craving blessings on your birthday." In the post, Aaradhya looks cute in a white top, blue jeans and matching headband. She adorably holds a balloon with "you are loved" imprinted on it. Take a look at Aishwarya Rai Bachchan's post here.

Happy Birthday to our Dearest Guardian Angel and Darling Daddy- AjjaLOVE YOU ETERNALLY Thank you Alllllllll our well-wishers world over for your Love, Prayers and wishesGod Bless your kind heartsLove from Mom, Aaradhya n Me always

Krishnaraj Rai died in March 2017. His last rites were performed in Mumbai and later, a prayer meeting was organised. The Bachchans and several members of the film fraternity paid their last respects to Krishnaraj Rai. Aishwarya's mother Vrinda Rai stays in Mumbai and often accompanies her daughter and Aaradhya to events and trips.

Last night, Aishwarya shared a picture of the 'most precious' gift Aaradhya gave her. It was a crown made with sparkles and was dedicated to the "best mom in the whole world."

A SURPRISE...made by MY WORLD for me todayLOVE YOU MY DARLING AARADHYA and THANK YOU for the MOST PRECIOUS crown EVERRRRRRR

A post shared by AishwaryaRaiBachchan (@aishwaryaraibachchan_arb) on Nov 19, 2018 at 10:24am PST

So cute, Aaradhya! Aaradhya turned seven on Friday and her birthday party was hosted over the weekend. On her birthday, Abhishek and Aishwarya, along with Aaradhya and the other members of the Bachchan family went for a private dinner while the next day, a star-studded party was held at their home.

A post shared by AishwaryaRaiBachchan (@aishwaryaraibachchan_arb) on Nov 17, 2018 at 1:11pm PST

On the work front, Aishwarya, last seen in Fanney Khan, has reportedly signed up for Anurag Kashyap's Gulab Jamun, opposite husband Abhishek Bachchan.