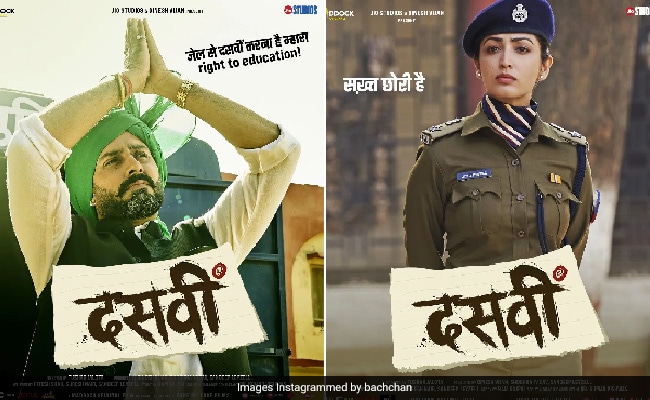 Abhishek Bachchan, who will be next seen in the film Dasvi, has unveiled new posters on his Instagram handle. Helmed by Tushar Jalota, the film is about an uneducated politician named Ganga Ram Chaudhary, who wants to appear for the Class 10 board exam from jail. The film also stars Yami Gautam and Nimrat Kaur in pivotal roles. The first new poster is of Yami, who is looking intense dressed as police officer Jyoti Deswal.  Calling her character "Sakht Chori," Abhishek captioned the poster as, "Jyoti ji badi sakht hain, trailer aane main abhi thoda waqt hain!"

The next poster is of Nimrat Kaur, who will be playing the role of Abhishek's wife, Bimla Devi. Dressed in a blue salwar suit, Nimrat can be seen sitting in the office of the Chief Minister, looking worried and confused. Sharing the poster, Abhishek captioned it as, "Mhari Bimmo kati jeher hain! Milliye humari dharam patni Bimla Devi Chaudhary se!"

Last but not least is Abhishek Bachchan, who is looking dapper in the role of a politician. He captioned the poster as, "Chaudhrahat ki pagdi apni shaan hai, Ganga Ram Chaudhary humara naam hai."

Here have a  look:

Meanwhile, makers will be releasing the trailer ofDasvitomorrow (March 23) at 11 pm. Produced by Dinesh Vijan in collaboration with Jio Studios, it will stream on two OTT platforms--Netflix and JioCinema on April 7, 2022.

On the work front, Abhishek also has SSS-7 in his kitty, which is scheduled to release this year.