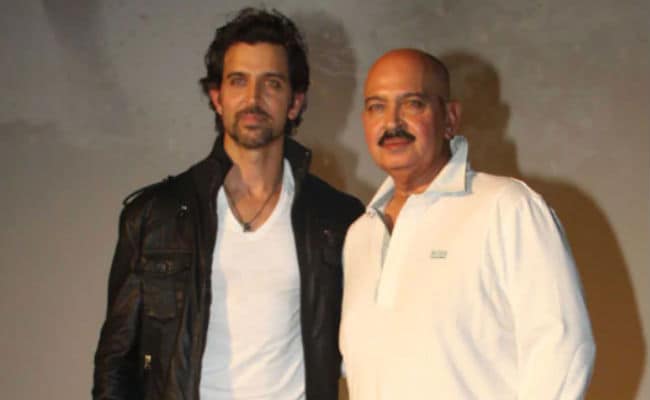 A file photo of Hrithik and Rakesh Roshan during the promotion of their film.

Rakesh Roshan's surgery for squamous cell carcinoma of the throat (or throat cancer) went well and the 69-year-old texted news agency IANS that he is feeling "all right." The filmmaker was diagnosed with throat cancer last week and on Tuesday his actor son Hrithik Roshan told fans on social media that he will undergo surgery for the same. "I am feeling all right, thank you. Surgery is done and all is okay. God is great. I am going to be back home on Friday or Saturday," texted Rakesh Roshan to IANS. The entire family was by Rakesh Roshan's side when he was in surgery. A source close to the family told IANS: "Ever since the diagnosis, Rakeshji has been upbeat cheerful and not at all daunted by the setback. He went into surgery with his wife, brother (composer Rajesh Roshan), son Hrithik and daughter Sunaina by his side and the surgery went smoothly. He is expected home by the end of this week."

Meanwhile, Hrithik Roshan had shared a picture of his father from the "gym on surgery day" and wrote: "...He is in full spirits today as he proceeds to battle it. As a family we are fortunate and blessed to have a leader like him."

Asked my dad for a picture this morning. Knew he wouldnt miss gym on surgery day. He is probably the strongest man I know. Got diagnosed with early stage squamous cell carcinoma of the throat a few weeks ago, but he is in full spirits today as he proceeds to battle it. As a family we are fortunate and blessed to have a leader like him. . Love you Dad.

Rakesh Roshan started his career as an actor in the Seventies. He featured in films such as Ghar Ghar Ki Kahani, Buniyaad, Khoobsurat, Kaamchor and Bhagwan Dada among others. Rakesh Roshan debuted as director with 1987 film Khudgarz and he also directed films like Khoon Bhari Maang, King Uncle, Koyala and Karan Arjun.