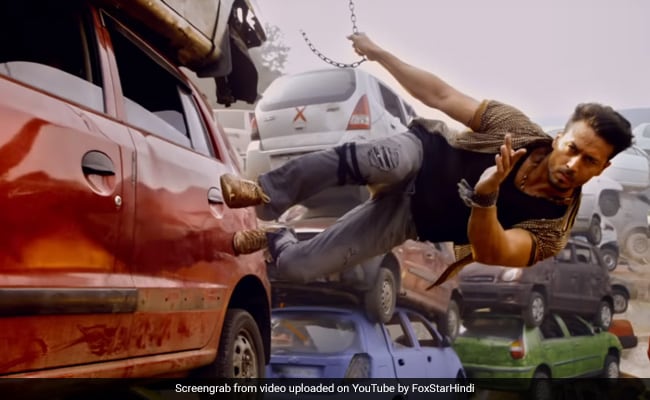 Tiger Shroff in a still from Baaghi 3 (courtesy YouTube)

Tiger Shroff's Baaghi 3 trailer made way for a meme fest on Twitter. No surprises here. In the recently released trailer, the actor features in gravity and physics defying stunts, which are now synonymous with Tiger Shroff movies. Netizens on Twitter described Tiger Shroff's bulked up and fighter like persona as "sasta Captain America." Tiger also got compared to a Bollywood version of Wonder Woman, particularly for the scene in which he uses a torn out piece of a helicopter door as shield against enemy bullets while kneeling down on the floor. Netizens found one particular dialogue of Tiger Shroff particularly amusing: "Main phod dunga." Jokes involving bubble wraps and glass windows and balloons popped up instantly. Twitter also shared imaginary versions of how Newton's would have reacted to Tiger's understanding of gravity. Another superhero - Black Panther - featured in the memes.

Here's a just glimpse of the memes generated on Twitter after the Baaghi 3 trailer released.

Indian Dads after each result of their not so brilliant kid: pic.twitter.com/sQRZwFunui

Whenever i see pimple on my face #Baaghi3Trailerpic.twitter.com/f1ZN68zZkl

After watching BAAGHI 3 trailer....
*Me: where is the story??
*Sajid Nadiadwala: pic.twitter.com/pSHT9pnIHB

Me to neighbour's window glasses pic.twitter.com/F2brj3sWiM

Whenever i see bubble wraps...#Baaghi3#Baaghi3Trailerpic.twitter.com/dySoSIlH1N

Baaghi 3 is the story of Ronnie, played by Tiger Shroff, who returns for the third time to headline the franchise. In order to secure his brother held captive by terrorists, Ronnie travels to Syria and tears the country apart. Ritiesh Deshmukh has been cast as Tiger Shroff's brother, who is a cop named Vikram. Shraddha Kapoor plays the role of Ronnie's love interest. Watch the Baaghi 3 trailer here:

Directed by Ahmed Khan and produced by Sajid Nadiadwala, Baaghi 3 will blow up your screens on March 6.