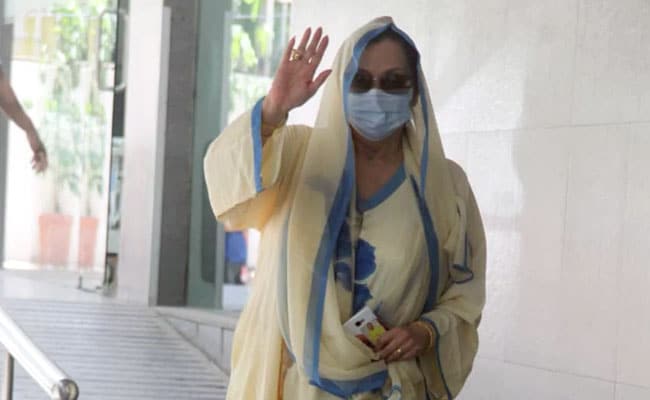 Veteran actress Saira Banu, who was admitted to Mumbai's Hinduja Hospital a couple of days ago after she complained of blood pressure-related issues, has been moved to the Intensive Care Unit (ICU) ward of the hospital on Wednesday, reports news agency ANI. As per the news agency, Saira Banu complained of issues related to blood pressure and was taken to the Hinduja Hospital three days ago. She has been shifted to the ICU ward today. Saira Banu's husband and actor Dilip Kumar died at the age of 98 in Mumbai in July this year. He was also admitted to Mumbai's Hinduja Hospital after he complained of breathlessness and he died there on July 7.

Saira Banu and Dilip Kumar were co-stars of films such as Sagina, Gopi, Bairaag and Duniya. The actress married Dilip Kumar in October 1966. Saira Banu was always with Dilip Kumar during his final days at the hospital. On July 7, their family friend Faisal Farooqui shared the news of Dilip Kumar's death on the actor's official Twitter handle. "With a heavy heart and profound grief, I announce the passing away of our beloved Dilip Saab, few minutes ago. We are from God and to Him we return," read the tweet. Dilip Kumar's last rites were held at the Juhu Cemetery on the same day.

With a heavy heart and profound grief, I announce the passing away of our beloved Dilip Saab, few minutes ago.

We are from God and to Him we return. - Faisal Farooqui

Saira Banu made her Bollywood debut in 1961 with the movie Junglee opposite late actor Shammi Kapoor. She is known for her performances in films like Padosan, Hera Pheri, Diwana, Shaadi, Purab Aur Paschim, Jwar Bhata, Aadmi Aur Insaan, Resham Ki Dori and Pocket Maar, to name a few. She was last seen in the 1988 film Faisla.

Madhuri Dixit Can Do The Ek Do Teen Hook Step To Any Song. Here's Proof