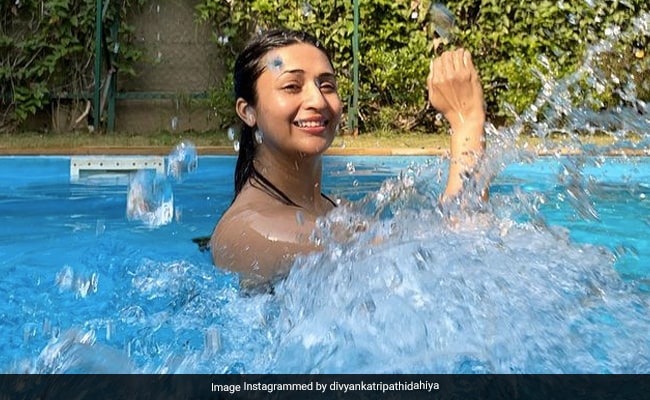 Actress Divyanka Tripathi, who is known for her performance in the TV show Yeh Hai Mohabbatein, is busy "creating her own waves" on Instagram. The actress, on Wednesday, posted a set of pictures of herself making a splash in a pool. We love her smile in the pictures. "Life's too still?" Divyanka asked her fans in the caption of her post and then provided a solution too: "Ruffle what you have around you. Create your own waves." Actress Neena Kulkarni commented "lovely" while Diya Aur Baati Hum star Deepika Singh dropped heart eye icons.

Divyanka Tripathi is married to actor Vivek Dahiya, who co-starred with her in Yeh Hai Mohabbatein. The duo even participated in the 8th season of dance reality show Nach Baliye and won the finale.

And here's what happened when Divyanka Tripathi and Vivek Dahiya visited their home in Bhopal:

On their anniversary last year, Divyanka Tripathi wrote this for her husband: "Least did I know four years back that we were creating a happily ever after for real. Nothing can match the magic your presence creates. Happy Anniversary my love. Let's celebrate the best decision of our life."

Divyanka Tripathi rose to popularity for playing the role of Ishita Iyer in Yeh Hai Mohabbatein. The actress has also featured in shows such as Coldd Lassi Aur Chicken Masala, Ramayan, Mrs. & Mr. Sharma Allahabadwale and Banoo Main Teri Dulhann, among others.

She recently featured in a special appearance in Yeh Hai Chahatein, a spin-off of Yeh Hai Mohabbatein.

How Ankita Lokhande And Vicky Jain Rehearsed For Their Sangeet